Let’s face it - almost no business today can afford to hire the amount of data scientists it would take to go from producing one machine learning model to 1,000 (or for that matter, 1 million) every year. The good news is that organizations don’t need to hire scores of data scientists in order to be productive.

Data scientists are a vital piece of the data team puzzle, to be sure. They are experts in machine learning model creation, tuning, monitoring, and revision, and they’re a critical component of bringing model interpretability, explainability, and fairness (as well as creativity) to the forefront.. But in order to do exponentially more machine learning without exponentially more data scientists, companies need to enable the data scientists that they do have - here’s how:

Allow Analysts (and Others) to Easily Support Data Scientists

By now, it’s a well-known fact that data scientists actually spend the majority - if not most - of their time on tasks like data preparation, and wrangling, which means they can only do so much model creation. That being said, the single easiest way to make your data scientists more efficient so they can release more machine learning models and work on more AI projects is to allow their work to be easily supported by data analysts.

That means giving both data analysts and scientists the tools that allow them to seamlessly do this work together. It’s important to note that this does not mean forcing data scientists to use tools that restrict them - that is, that don’t allow them the flexibility to code the way they want to, when they want. Ultimately, restriction won’t let data scientists be as creative or cutting-edge as you (or they) would like.

If employees in lines-of-business need to go to IT or to data scientists every time they need to do anything - whether it’s access some data or create a report - it will slow these specialists down and take time away from their more impactful work. 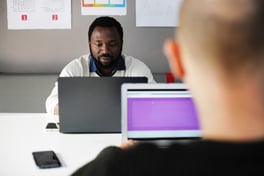 Instead, enabling others at the company through a well-implemented self-serve analytics program can drive the enterprise forward in using data for decisions without placing all the burden on data scientists to deliver and transform the business single-handedly. It’s the idea of data democratization, but without the hype of the so-called citizen data scientist.

The buck doesn’t stop at the creation of machine learning models - they can’t make a real impact of the business until they are actually in a production environment. That’s why everyone lately is talking about operationalization, or deploying a machine learning model for use across the organization.

In data science projects, the derivation of business value follows something akin to the Pareto Principle, where the vast majority of the business value is generated from the final few steps: the operationalization of that project. This is especially true of applications such as real-time pricing, instant approval of loan applications, or real-time fraud detection, to name a few.

All of this to say that if the process of operationalization is difficult and time-consuming, it will be extremely difficult to accelerate data efforts, no matter how many data scientists you hire. Provide data scientists with the right tools to get out of the sandbox and into production easily - and keep in mind that this might also involve the IT team, so make sure they have all the right tools as well.

Entering the AI race without AutoML or augmented analytics (read: larger-scale automation throughout the data-to-insights process) would be like entering a driver into a Formula 1 Grand Prix without the right car and supporting team. Sure, you can do machine learning and eventually AI without it, but it will be much slower and less efficient, which inherently means trouble scaling. Read more about AutoML and other types of automation you can introduce for efficiencies in this white paper.

When it comes to scaling up AI efforts, automation and operationalization matter.

The commonality between all of these necessities to make data scientists successful and their work scalable is having the right tools. Open source tools are all the rage, but how can they be leveraged in the enterprise where reproducibility and governance matter? Get the white paper by 451 Research about the adoption of open source tools for the enterprise. Or read more about how data platforms can help support each of these initiatives.

Get monthly updates of everything going on at Dataiku: new content, product updates, upcoming events, and everything the Dataiku team has been up to!
Sign Up
March 1, 2019 Scaling AI Lynn Heidmann
Share