Imagine you’re in a landlocked country, and a mystery infection has spread. The government has fallen, and rebels are roaming the country. If you’re the armed forces in this scenario, how do you make decisions in this environment? How can you fully understand the situation at hand? 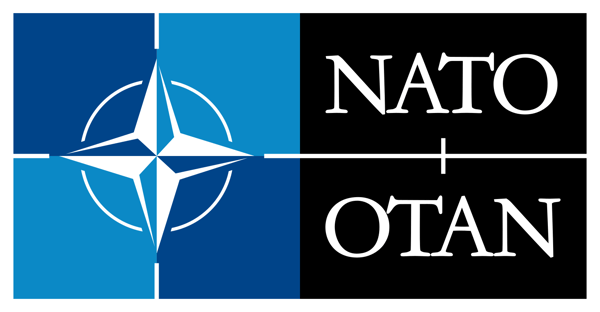 In the summer of 2018, NATO organized an innovation challenge that posed this very scenario and these very questions. We decided to take on the challenge with the goal of finding innovative solutions in the areas of data filtering/fusing, visualization, and predictive analytics.

For those who don’t know, NATO is an intergovernmental military alliance between 29 North American and European countries. It constitutes a system of collective defense whereby its independent member states agree to mutual defense in response to an attack by any external party.

NATO did not provide any data for the challenge, so we had to find it ourselves. Ultimately, the solution we came up with used a variety of different techniques including computer vision on aerial imagery, natural language processing on press & social media, geo data processing, and — of course — fancy graphs.

In this post, we will focus on the most technical part: object detection for aerial imagery, walking through what kind of data we used, which architecture was employed, and how the solution works, and finally our results. If you’re interested in a higher-level look at the project, that’s over here.

For the object detection portion of the project, we used the Cars Overhead With Context (COWC) dataset, which is provided by the Lawrence Livermore National Laboratory. It features aerial imagery taken in six distinct locations:

*We ultimately did not use the Columbus and Vaihingen data because the imagery was in grayscale.

This dataset offers large imagery (up to 4 square kilometers) with good resolution (15cm per pixel) with the center localization of every car. As suggested in this Medium post, we assumed that cars have a mean size of three meters. We created boxes centered around each car center to achieve our ultimate goal of predicting box (i.e., car) locations in unseen images. 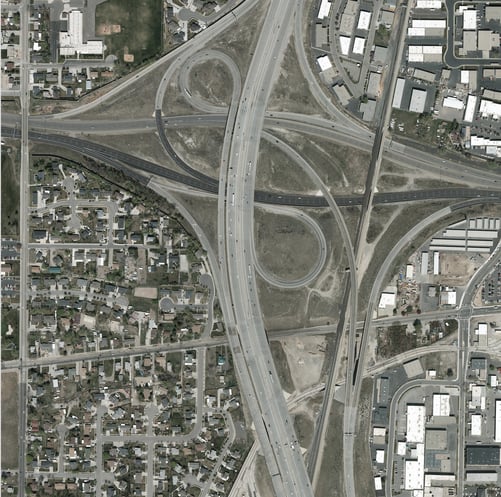 Figure 1: An example image from the COWC dataset

To detect cars in these large aerial images, we used the RetinaNet architecture. Published in 2017 by Facebook FAIR, this paper won the Best Student Paper of ICCV 2017.

Two-stage architectures first categorize potential objects in two classes: foreground or background. Then all foreground’s potential objects are classified in more fine-grained classes: cats, dogs, cars, etc. This two-stage method is very slow but also, and of course, produces the best accuracy. The most famous two-stage architecture is Faster-RCNN.

On the figure 2 below, you can see a comparison of various object detection architectures. 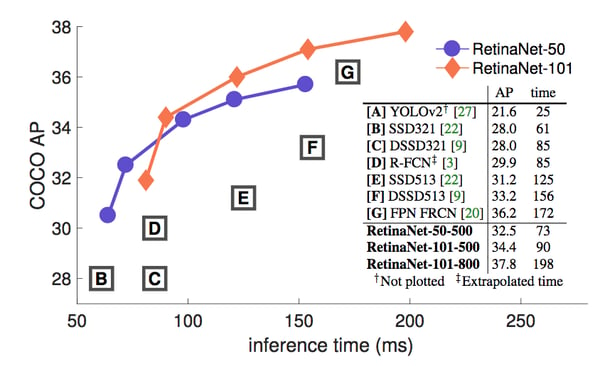 RetinaNet is made of several components. We’ll try to describe how the data is transformed through every step.

First of all there is a ResNet-50. As every convolutional neural network (CNN), it takes an image as input and processes it through several convolution kernels. Each kernel’s output is a feature map — the first feature maps capture high-level features (such as a line or a color). The further we go down in the network, the smaller the feature maps become because of the pooling layers. While they are smaller, they also represent more fined-grained information (such as an eye, a dog ear, etc.). The input image has three channels (red, blue, green), but every subsequent feature map has dozens of channels! Each of them represents a different kind of feature that it captured.

Instead of adding a classifier after ResNet, RetinaNet adds a Feature Pyramid Network (FPN). By picking feature maps at different layers from the ResNet, it provides rich and multi-scale features. 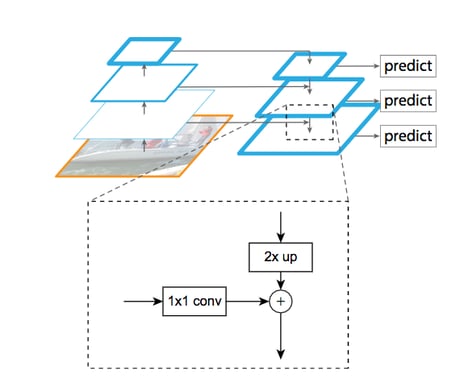 Figure 4: The lateral connection between the backbone and the FPN

Each level of the FPN encodes a different kind of information at a different scale. Thus, each of them should participate in the object detection task. The FPN takes as input the output of the third (512 channels), fourth (1024 channels), and fifth (2048 channels) blocks of ResNet. The third is half the size of the fourth, and the fourth is half of the fifth.

We applied pointwise convolution (convolution with a 1x1 kernel) to uniformize the number of channels of each level to 256. Then we upsampled the smaller levels by a factor of two to match the dimension of the bigger levels.

At each FPN level, several anchors are moved around the FPN’s feature maps. An anchor is a rectangle with different sizes and ratios, like this: 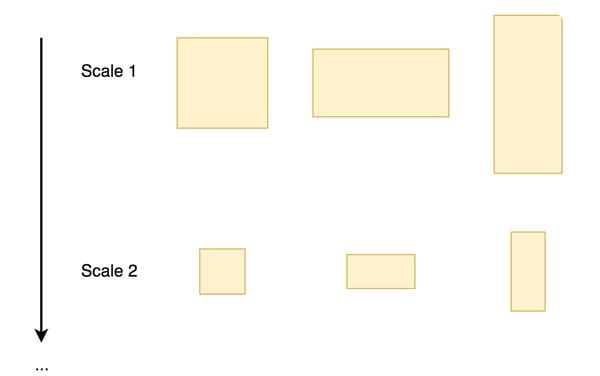 Figure 5: A sample of anchors of different sizes and ratios

Let’s put aside those anchors for the moment.

Each FPN’s level is fed to two Fully Convolutional Networks (FCN), which are neural networks made only of convolutions and pooling. To fully exploit the fact that every FPN’s level holds different kind of information, the two FCNs are shared among all levels! Convolution layers are independent of the input size; only their kernel size matter. Thus while each FPN’s feature maps have different sizes, they can be all fed to the same FCNs.

With x? and y?, the fixed coordinates of the anchors, and dx?, dy?, the deltas produced by the regression branch.

We now have the final coordinates for all objects — that is, all potential objects. They are not yet classified as background or car, truck, etc.

The second FCN is the classification branch. It is a multi-label problem where the classifier predicts K x N (N being the number of classes) potential objects with sigmoid.

At this point we have K x 4 coordinates and K x N class scores. We now have a problem: it is common to detect, for the same class, several boxes for a same object! 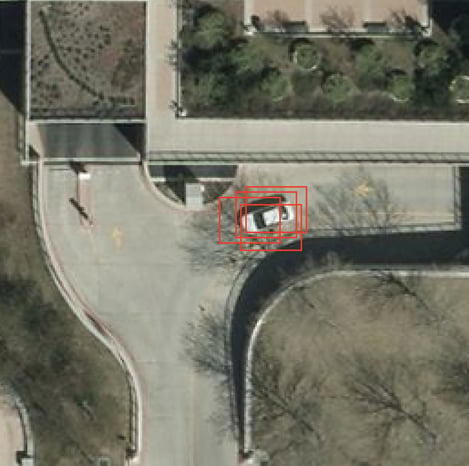 Figure 6: Several boxes have been detected for a single car.

Therefore, for each class (even if it’s not the highest scoring class) we apply a Non-max suppression. Tensorflow provides a function to do it:

The main gist of this method is that it will remove overlapping boxes (such as in Figure 6) to keep only one. It also using the scores to keep the most probable box.

A general comment on the input parameter of the Tensorflow method above: The max_output_size corresponds to the maximum number of boxes we want at the end — let’s say 300. The iou_threshold is a float between 0 and 1, describing the maximum ratio of overlapping that is accepted. 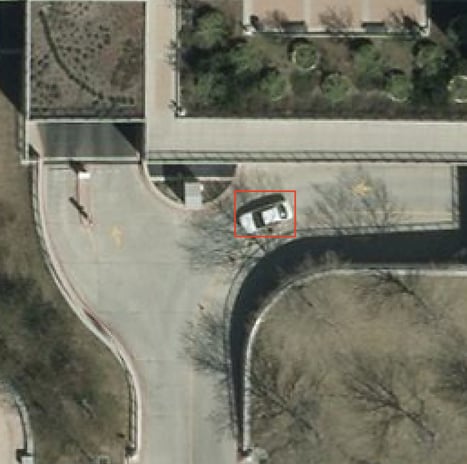 Figure 7:  Figure 6 after the non-max-suppression has been applied.

2.6. Keeping the Most Probable Class

Duplicate boxes for the same class at the same place are now removed. For each of the remaining boxes, we are keeping only the highest-scoring class (car, truck, etc.). If none of the classes have a score above a fixed threshold (we used 0.4), it’s considered to be part of the background.

All this may sound complicated, but it’s nothing new — it’s not enough to have good accuracy. The real improvement from RetinaNet is its loss: the Focal Loss. Single-stage architectures that don’t have potential objects pre-selection are overwhelmed with the high frequency of background objects. The Focal Loss deals with it by according a low weight to well-classified examples, usually the background.

Figure 8: We define Pt, the confidence to be right

In Figure 8, we define Pt, the confidence to be right in a binary classification.

In Figure 9, we module the cross entropy loss -log(Pt) by a factor (1 — Pt)^y . Here, y is a modulating factor oscillating between 0 and 5. The well-classified examples have a high Pt , and thus a low factor. Therefore, the loss for well-classified examples is very low and forces the model learn on harder examples. You can see in Figure 10 how much the loss is affected. 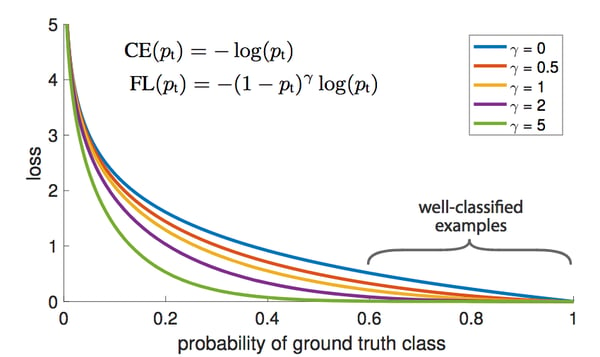 We used the excellent Keras implementation of RetinaNet by Fizyr. We also wrote a new generator, taking Pandas’ DataFrames instead of CSV files.

As you can see, images without annotations are kept in the training phase. They still help the training of our algorithm, as it forces the algorithm to not see cars everywhere (even where there aren’t any).

We used a pre-trained RetinaNet on COCO and then fine-tuned it for the COWC dataset. Only the two FCNs are retrained for this new task, while the ResNet backbone and the FPN are frozen.

You can see in code block 2 below how to load the RetinaNet and compile it. Note that it is important to add skip_mismatch=True when loading the weights! The weights were created on COCO with 80 classes, but in our case we only have 1 class, thus the number of anchors is not the same.

There is something we still need to deal with, which is the massive weight of each image. Images from the COWC dataset are up to 4 square kilometers, or 13k pixel wide and high. Those big images weigh 300mb. It is impracticable to feed such large images to our RetinaNet. Therefore, we cut the images in patches of 1000x1000 pixels (or 150x150 meters).

However, it would be stupid to miss cars because they’d been cut between two patches. So to avoid this problem, we made a sliding window of 1000x1000 pixels that moves by steps of 800 pixels. That way, there is a 200-pixel-wide overlap between two adjacent patches.

When dealing with aerial imagery, we can use a lot of data augmentation. First of all, we can flip the horizontal axis and the vertical axis. We can also rotate the image by any angle. If the imagery’s scale is not uniform (the distance drone-to-ground may not be constant), it is also useful to randomly scale down and up the pictures.

You can see on Figures 11 and 12 below how our RetinaNet behaves on this unseen image of Salt Lake City. 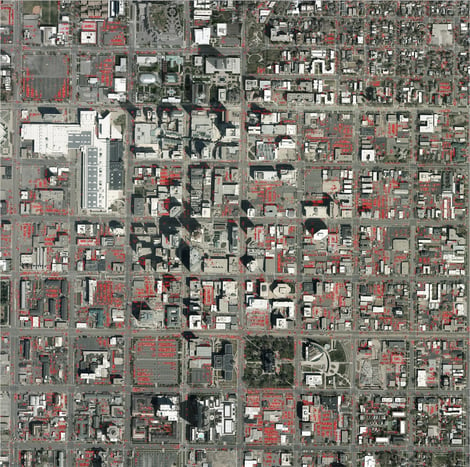 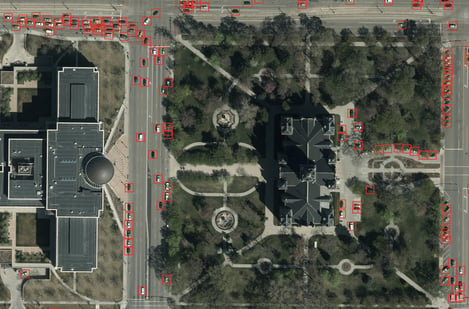 How can we evaluate our performance?

The recall measures the former while the precision measures the latter. Finally, the f1-score is a combination of those two metrics.

However, we are not expecting our RetinaNet to detect the cars at the exact right pixels. Therefore, we are computing the Jaccard Index of the detected cars and the ground-truth cars, and if it is more than a chosen threshold, we consider that the car was rightfully detected. Note that the Jaccard index is often also (blandly) called Intersection-over-Union (IoU): 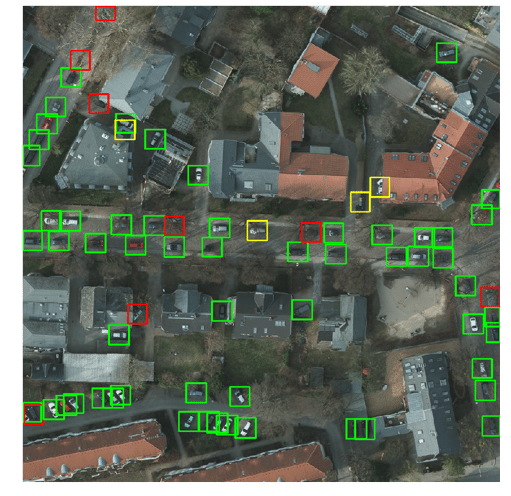 You can see a sample on Figure 13 where true positives, false positives, and false negatives have been plotted.

Note that among the four false positives, two of them are garbage bins, one is a duplicate, and one is actually … a car! Indeed, as in every dataset, there may be some errors in the ground-truth annotations.

On Figure 12, the f1-score is 0.91. Usually in more urban environments the f1-score is around 0.95. The main mistake our model makes is considering ventilation shafts on tops of buildings to be cars. To the model’s defense, without knowledge of building, it’s quite hard to see that.

For the NATO challenge, we didn’t only use car detection from aerial imagery, but it was the main technical part of the project.

We won both the NATO and France prize! You can read more high-level about the project (including all the data we used and methodology) here. 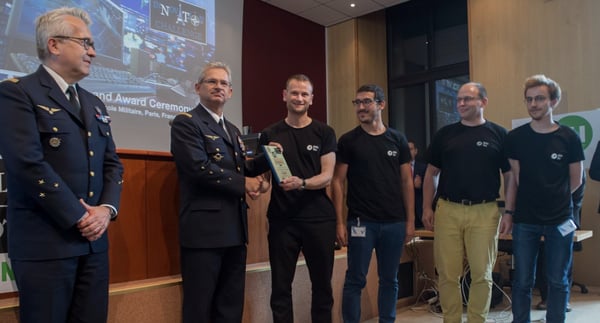 Read More Data From the Trenches

Integrate and Leverage Your SAP Infrastructure With Dataiku

Key Applications of Machine Learning in the Fashion Industry