Given the maturity that machine learning is reaching, it becomes increasingly important to follow standardization and extension principles specific to software engineering. Undoubtedly one of the most used libraries in the field of machine learning is scikit-learn. The tool offers an abstraction called Pipeline, through which it is possible to rationalize the flow of machine learning transformations in order to write code ready for production and to be easily reused.

The transition from unstructured code to the use of pipelines brings numerous advantages:

Experiment: For example, if you want to perform a grid search also on data transformations, such as the standardization of one variable, this can be easily carried out.

Shift to production: For example, a PCA step before the model estimation becomes part of the pipeline. That pipeline can be shared between experiment and production.

2. Rapid transition into production (even with complex preparations)

The pipeline used to train the model can be reused to make the prediction in production.

It makes the code much easier to reuse among different analyses or projects.

In enterprise environments, it is important to follow standards to reduce errors and improve understanding of the code.

Use of quality libraries, maintained over time and supported by the community

Transformer takes a set of input data, applies a transformation to it, and returns the modified data to the output. These classes must implement the transform method and encapsulate a set of data transformation logics. There are several Transformer defaults from the scikit-learn library, but new ones can be also created.

Through the Predictor class, it’s possible to train a model based on a certain training set (potentially pre-processed through Transformer) and use it on fresh data. These classes must implement the predict method. Scikit-learn gives you a possibility to create a custom Predictor which can be, for example, a classifier or a regressor.

This object allows you to chain multiple transformations followed by a final Predictor. This describes the transformation logics and the configuration used in the model used for the prediction.It is important to note that a pipeline can be composed by other pipelines.

Through this element, it is possible to create multiple Transformers that start from the same input and produce independent outputs. The result of each Transformer is then added to the final DataFrame.

Create Your Own Transformer or Predictor

Sometimes, especially in an enterprise project, it is necessary to create our own Transformer or Predictor. Although not explained in this article, scikit-learn allows you the possibility to do this. However, you can see an example below where an extended version of XGBoost is used to implement ‘early stopping’ to prevent model overfitting.

An example of a Pipeline which carries out different transformations (imputation of missing values, vectorization, PCA, etc.) is provided below.

This code aims to demonstrate how the organization in Pipeline leads to writing more compact and understandable experiment codes.

Furthermore, using a new scikit-learn feature, it is possible to graphically show the pipeline’s DAG (Direct Acyclic Graph). To enable it, the code below is used:

The diagram below offers a high-level view of the whole experiment to aid understanding.

It is important to note that ‘XGBoostRegressorWithEarlyStop’ is a custom Predictor which results from the extension of the base XGBoostRegressor (xgboost library) estimator where the early stopping feature was included.

Speaking of transition to production, the use of pipelines allows you to save not only the developed model but also all the transformations made on the variables. To persist the pipeline we can use the joblib library. A good practice is to store all the developed pipelines, versioning them in a dedicated storage location. Here is an example of code to store the pipeline:

For the production environment, you can simply load the previously saved pipeline and use it for prediction without worrying about the data preparation.

Here an example of a basic architecture that leverages the use of pipeline: 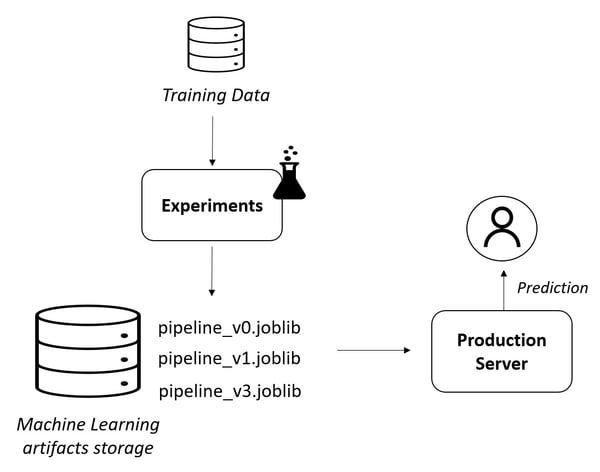 Through the use of pipelines, especially in an enterprise environment, we have several advantages in organizing, maintaining, reusing, and productionizing the machine learning pipeline.

It is especially possible to make changes during experiments without worrying about having to replicate it in production, making the shift to production a seamless process throughout the development phase. Pipelines prove to be a highly valuable tool for the lifecycle of the model, quickly bringing tangible results to data science projects.

The above post is a guest contribution from our friends at BitBang. BitBang  is a leader in digital analytics, web measurement consulting, and customer experience management, accelerating business transformation through data strategy and data execution practices.

Get monthly updates of everything going on at Dataiku: new content, product updates, upcoming events, and everything the Dataiku team has been up to!
Sign Up
June 12, 2020 Use Cases & Projects, Featured Luca Guerra and Silvio Saglimbeni
Share