AI predictions compress time: Reduce credit card refunds from 60 to 30 days or time to detect chip manufacturing problems from 36 hours to zero. Increasingly, companies are going beyond zero and using AI to detect things before they happen: identifying the purchase of a large screen TV with a stolen credit card hours before it happens, replacing an airplane valve days before it fails, and flagging semiconductor manufacturing defects an hour before they’re produced.

These shifts will require industry stakeholders to rethink metrics that they’ve used since Deming and Six Sigma. What are the implications of negative time to detect and infinite time between failures? How can you have confidence in the time to detect an event that doesn’t happen? These are some of the challenges that industries will face as AI affects more and more processes. In this blog post, I’ll cover four examples: retail subscriptions, credit card transaction fraud, airliner maintenance, and semiconductor manufacturing yield.

1. Receive Products Before You Want Them

The excellent 2018 book “Prediction Machines” explains the economics of AI and speculates that if Amazon.com’s product recommendations were good enough, then they could send you products before you want them. A lot has changed since 2018. Stitch Fix now does just that: sends you items you’ll probably want and you just return those you don’t.

And I no longer even know when to get new blades in my razor. My Amazon subscription takes care of that. I used to decide that I needed new blades, add it to a shopping list, wait 3-10 days to go to a store, hope I remembered to bring the list, buy new blades, and replace them. That got compressed with e-commerce to where I could order blades in seconds on my smartphone and they arrive two days later. But with Amazon subscriptions, they arrive a few days before I even need them, driving customer loyalty and higher customer long-term value for Amazon. 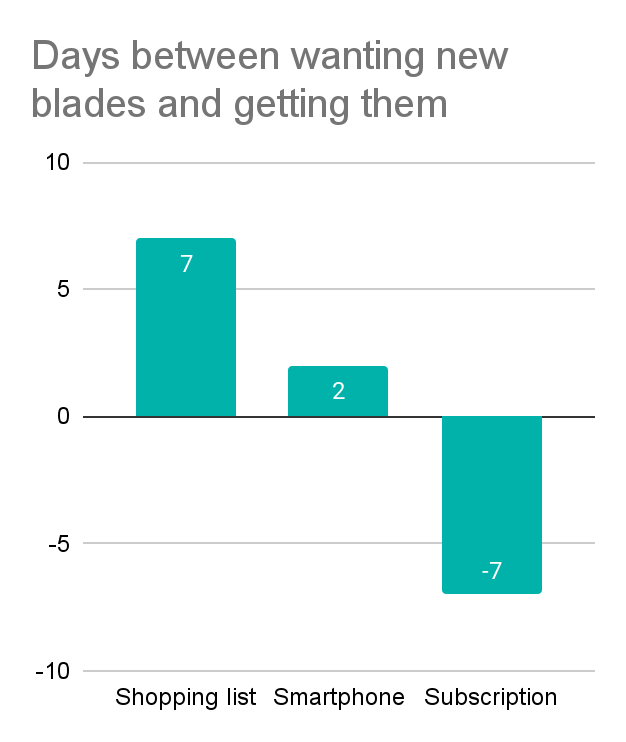 As we’ve mentioned, good predictions compress time and can even make it go backwards — which is what started happening 40 years ago with credit card fraud. It used to be that you’d have to wait for your monthly paper bill to spot a fraudulent transaction. Then you would call customer service and they would create a work item that’s sent to the fraud department who would manually review it, and so on. Typically it would take 60-90 days to get a refund. Later, the fraud department could score suspicious transactions on their likelihood to be fraudulent, which cut the refund time in half.

Once prediction costs became low enough, all transactions were scored in real time and banks found patterns for identifying stolen credit cards. Card thieves often don’t immediately go out and purchase a big screen TV. Instead, they first test the card at an automated point of sale such as a gas station, buying $1 of gas to validate that the card still works. Banks detected that in real time and disabled the card before thieves got to the TV store. 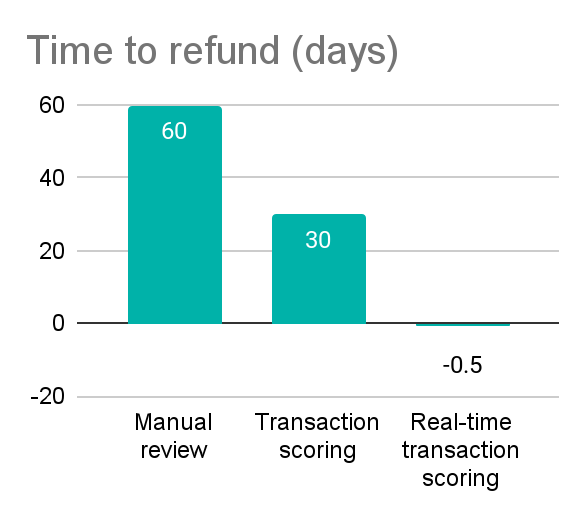 3. Identify Machine Maintenance Before It's Needed

It’s happening today with predictive maintenance for all kinds of industrial equipment. Years ago, a commercial airline pilot would notice in flight that a valve was failing and make an entry in the flight log. After landing, the entry went to the operations team who scrambled to locate a replacement part and a qualified mechanic, and get both to the plane.That manual process might take 15 hours for some parts.

Later, planes were instructed so that they called the operations center directly while flying, bypassing the pilot. Often a part and mechanic can be waiting upon landing, reducing repair time by two thirds. What happens now is planes constantly send performance data on thousands of parts to operations rather than just for failing parts. Predictive maintenance systems on the ground then predict future failures, compare that to parts inventories and mechanic schedules, and parts are replaced days before they fail. That type of optimization across hundreds of planes, mechanics, and parts both increases uptime and decreases costs. 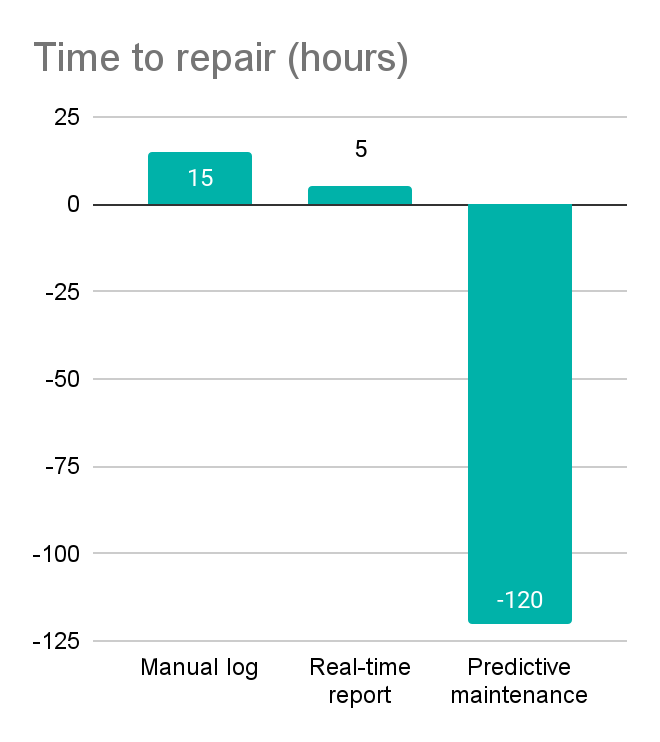 4. Reduce the Time to Detect Defects

A fourth example of AI compressing time involves semiconductor manufacturing. Companies such as NXP have fabrication processes that are far more complex than an airplane valve. Previously, they’d pull a wafer from the production line every three days or so, test it, and make adjustments if the chips on the wafer were defective. On average, the line produced defects for 36 hours before they detected it.

More recently, they began using tens of thousands of variables to predict whether the line is currently generating defects. Today, semiconductor manufacturers are moving to predicting defects before they happen and, taking it a step further, suggesting the adjustments necessary to prevent defects. Time to detect defects went from 36 hours to zero to negative one. 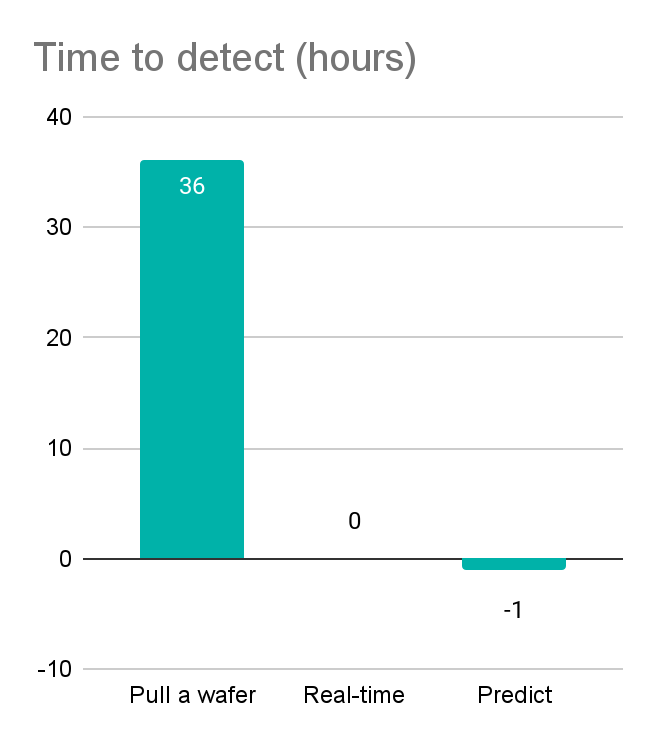 AI, like electricity, plastics, and microprocessors before it, will affect every industry. AI-enabled predictions are not only compressing time periods but eliminating them all together, and we saw examples from retail, financial services, industrial maintenance, and manufacturing. This will increase efficiency but also require industries to reevaluate some basic metrics such as time to detect, time to resolve, and time between failures.

Future-Proof Your Operations With Predictive Maintenance

Go further on predictive maintenance to see how any organization with high-capital assets can use machine learning to control rising equipment maintenance costs and pave the way for self-maintenance through AI.
Check it out
August 4, 2022 Use Cases & Projects, Scaling AI Doug Bryan
Share

Why Is Data Architecture Important for the Success of AI?