If you have heard of CI/CD, are (or will be) using Dataiku DSS, and are wondering whether the two make sense together, you are in the right place. In this article, we will review the basics on CI/CD and cover all the topics that require special attention. Note that it goes hand-in-hand with our knowledge base entry, Building a Jenkins pipeline for Dataiku DSS, which shows step-by-step how to apply the concepts introduced here.

In order to be at ease when reading this post, we recommend you to have a basic understanding of Dataiku DSS flows, scenarios, and automation — following the operationalization series from the Dataiku Academy is a perfect introduction.

The goal of operationalization (or o16n) is to facilitate ML projects' move to production. However, achieving this goal is a real challenge, as there are many aspects to cover (we touch on some, like the relevance of a model or the business expectations, in the guidebook Data Science Operationalization — don't hesitate to read it as a complement to this article).

For this article, we will discuss the control, monitoring, and governance of machine learning model and AI application deployment. This can of course take many forms depending on your project, needs, and policies. Two basic concepts in o16n are automation and frequency:

The Continuous Integration (CI) and Continuous Deployment (CD) approaches — known together as CI/CD — are meant to streamline this move to production. As such, they allow the data team to focus on more valuable tasks than deployment issues. Regular and reliable deployments will also allow for easier debugging of flows and models by avoiding major changes.

The common word in both Continuous Integration (CI) and Continuous Deployment (CD) is “continuous:” you do not package, test, release, or move to production as an extraordinary event, but as often as possible. In order to achieve this goal, you need a reliable automation process and specific work in your Dataiku DSS project. 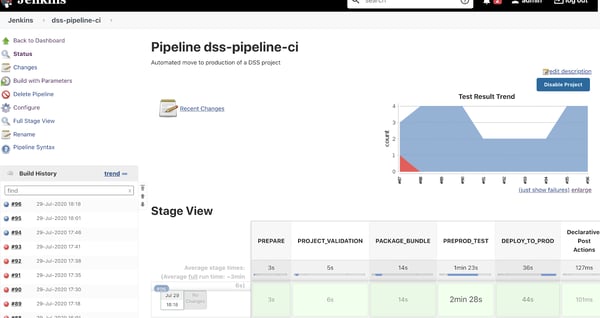 Choosing the Components of Your CI/CD Platform

The backbone of your CI/CD project is called the orchestrator. It defines and runs the automation process, usually offloading the work to executors. There are many orchestration tools on the market like Jenkins, GitLabCI, Travis CI, or Azure Pipelines, to name a few.

Dataiku DSS has no specific relationship with any of them, and they will all work, as they all usually have the required features: building a pipeline with code steps leveraging Dataiku DSS APIs. The choice of orchestrator will therefore be yours according to your own needs and restrictions.

Artifact repositories are used in a CI/CD context in order to store released packages. This might be helpful in our case (or even mandatory in your organization) to store the models or flows that are going to be pushed into production.

Like orchestrators, there are many tools to do that on the market and, in the end, you will probably have to use the one your company is already using. You just need to confirm you can store a Dataiku DSS project bundle and that you can call it easily from your orchestrator (usually through APIs or plugins).

When dealing with operationalization, and especially CI/CD, multi-node architecture is a must have. If you are using only Design nodes, then your first step might be to look at what Automation and API nodes are to integrate them in your architecture. The minimal setup you need is one Design node as your development environment and one Automation as your production environment:

If your needs are more advanced, a more complete architecture is also possible, with work dispatched across multiple nodes and multiple environments, like this:

When operationalizing a Dataiku DSS project flow, one key element to decide is the pipeline source: where your process will begin. Standard CI/CD pipelines usually start with a source repository (like Git). From there, the source code can be exported, tested, compiled, tested, and packaged. This covers the CI part of the CI/CD flow. As for the CD part of the CI/CD flow, you are working from the package that has been generated by the CI part.

Since Dataiku DSS supports integrating with external Git repositories, you can take this approach. 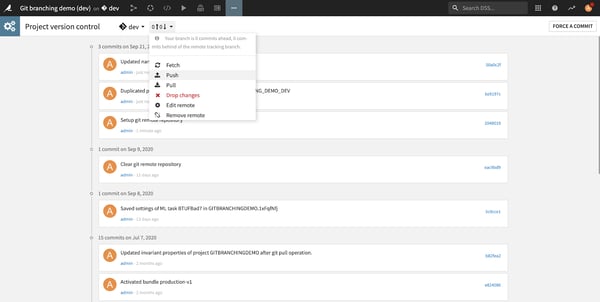 The right way to preserve all Dataiku DSS project contents is to use the Dataiku DSS concept of bundles right from the start, along with the APIs to do both the CI and the CD workflow. Your pipeline will then start by building a bundle on the source design node and to use it as your CI/CD pipeline artifact.

Bundles in Dataiku DSS contain everything needed to transfer a project to an Automation node.

There are numerous articles, blogs, and books on CI/CD — we will not repeat them. However, this section presents some important topics specific to the context of ML and Dataiku DSS.

Testing is probably the most important part of your pipeline, and it’s also the one that will require the most work. Tests need to be conceived and run at all stages: unit tests, integration tests, smoke tests, etc. However, there are specific ways to write tests that will make them more efficient and integrated in our case.

The first constraint is to write tests in a way that is compatible with your orchestrator so that you can use their result to act if the quality isn’t good enough. Usually, producing xUnit standard reports is the way to go —  all test frameworks (and most orchestrators) support it.

With Dataiku DSS, the easiest approach is to write your tests in Python. Dataiku DSS has a powerful and easy Python client, and Python has several simple test frameworks that support xUnit reports (such as unittest, pytest, or nose) 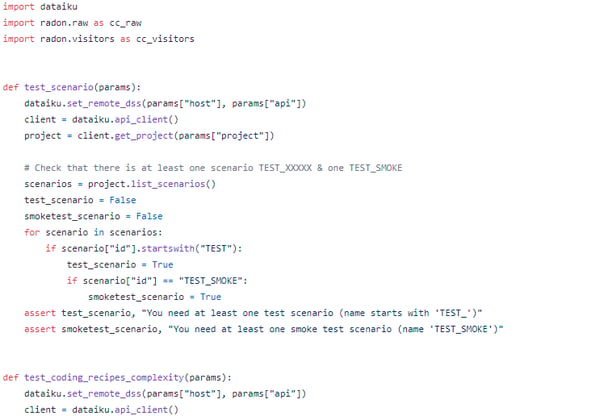 Additionally, when writing tests, you need to make sure to put the effort where it counts. That means not focusing solely on coding tests but also on business-oriented integration tests. For such a need, we advise you to look at Dataiku DSS scenarios:

Additionally, since scenarios are part of the bundle, they are imported along the process and can be re-run at each stage very easily. You can imagine, for example, having a set of scenarios named TEST_XXX that you would execute one by one and return their result in a standard format.

Build a CI/CD Pipeline, Not a CI Pipeline

A typical pitfall of CI/CD projects is that they tend to downplay the deployment part, instead focusing on the code, unit test, and packaging due to the longer experience on this part and the numerous tools and practices that exist. This is a mistake you should avoid at all costs: you need to focus equally on the code part and on the deployment part.

When dealing with deployment, there are many points that need attention — here are a few:

Additionally, here are some Dataiku DSS features that might prove handy in this context:

Apply CI/CD to the CI/CD

Your CI/CD project might start small with a few automated steps calling Dataiku DSS APIs and doing some manual tasks. However, if things are going well, it will grow fast and will end up with many different steps, several interactions with 3rd parties, customization by project or teams, and a lot of other features.

At that stage, your CI/CD project itself is becoming risky if you do not manage it well enough. Imagine you update the main code of the pipeline and introduce an error that breaks many builds. That is neither good for the productivity of your teams nor for your image. So don't forget to apply all the principles listed here to your pipeline project itself (central shared repository of code, releasing often, automated tests, easy rollback, etc.).

We have seen a lot here, and hopefully it's been useful to help you assess if — and how — you should start your CI/CD project with Dataiku DSS. If you are interested in a step-by-step guide on how to build such a project using Jenkins, you can continue your journey in our Product Knowledge base.
Get the Step-by-Step Walkthrough
September 30, 2020 Use Cases & Projects, Dataiku Product, Tech Blog François Sergot
Share