Test Your Skills With A Data Science Crossword

Data scientists are busy people, but that doesn't mean they don't have time for fun! We've created a data science crossword that melds work and play, so try it out!

Written by Triveni Gandhi, a Dataiku Data Scientist and crossword buff, "Mo' Data? No Problems" is a whimsical crossword for data enthusiasts. Gandhi is a big fan of the New York Times crossword and the steps The Inkubator is taking to publish and support more women in crosswords. While the NYT often repeats words and clues, ("ERA" is an answer once every few weeks) this puzzle is one-of-a-kind. Dataiker Charlie Cohen got a sneak peak at the puzzle, and says that it's “cleverly constructed and filled with zany data science clues." 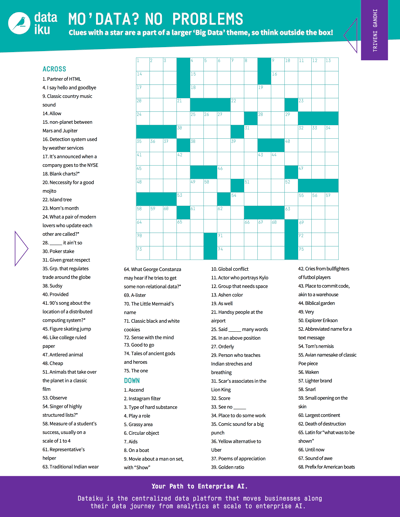 We asked Triveni if she had any advice, and she suggested thinking about the intersection of pop culture, data science, and puns. Charlie recommends "making sure to think about the wider big data ecosystem.”

Find A Community of Like-Minded Punsters

Join the Dataiku Community to hang out with other data enthusiasts and Dataiku DSS users. Featuring weekly data science conundrums, online events and meetups, and more, the Community is a great way to stay engaged. Check it out!
Join the Community
October 4, 2019 Data Basics Claire Carroll
Share

Is RPA the same as AI? What’s the Difference, and What Are the Use Cases?