Dimensionality Reduction: How It Works (In Plain English!)

As a reminder, unsupervised learning refers to inferring underlying patterns from an unlabeled dataset without any reference to labeled outcomes or predictions. Clustering refers to the process of automatically grouping together data points with similar characteristics and assigning them to “clusters.” Dimensionality reduction, on the other hand, refers to a set of techniques that reduces the dimensionality — or, number of features — in your dataset. Let’s take a closer look.

Why Do We Need to Reduce Dimensionality?

It may be tempting to just throw as many features as possible into your model (more data is better, right?), but it’s very important to understand the shortcomings that go along with including too many features in your model. These shortcomings are collectively known as the curse of dimensionality.

The key downfalls associated with having very high-dimensional datasets include:

We can try to get more data or more powerful machines with larger storage capacity, but this is not always possible or sufficient to solve the problem.

Let’s imagine we’re going to build a model to predict how much money an individual customer will spend at our store — Willy Wonka’s Candy — this week. We have a large dataset with customer demographics as well as information on how much they spent on all of the candies at our store last week.

The above is just a very small snapshot of a handful of rows and columns, but let’s imagine that this dataset actually had hundreds or thousands of columns. Some of these columns may be completely unhelpful in predicting customer spend, while others may have quite a lot of overlap and won’t need to be considered individually. For example, maybe we can combine Dum Dums and Blow Pops to look at all lollipops together. Dimensionality reduction can help in both of these scenarios.

There are two key methods of dimensionality reduction:

Let’s imagine our dataset also has a column on customers’ favorite movies, and we realize that this is not incredibly helpful in helping us predict how much they’ll spend at our store. With feature selection, we’d just exclude this entire feature. This particular example might be obvious, but that isn’t always the case. We can perform feature selection programmatically via three key methods: wrapper, filter, and embedded methods.

Wrapper methods iterate through different combinations of features and perform a model retrain on each. The feature combination which resulted in the best model performance metric (accuracy, AUC, RMSE, etc.) is selected.

These methods are typically not preferred as they take a long time to compute and tend to overfit.

Filter methods apply a threshold on a statistical measure to determine whether a feature will be useful. Two key methods include:

These methods are very straightforward and intuitive. However, they require manual setting of a threshold which can be dangerous, as too low of a threshold may mean the removal of important information. Additionally, these two methods are often not sufficient if we want to seriously reduce the dimensionality of our dataset.

Embedded feature selection combines key features of wrapper and filter methods and is often a great place to start, as long as you’re using a compatible algorithm.

Feature extraction allows us to keep parts of features, so that we just keep the most helpful bits of each feature. This way, we don’t lose too much information by removing entire features. Principal Component Analysis (PCA) is far and away the most common method of performing feature extraction and is the method we’ll explore in this post.

The purpose of PCA is to reduce the number of features included while still capturing the key information, or the spread of the data, as measured by the variance.

There are two key methods of computing the principal components — eigendecomposition and singular value decomposition (SVD). The details of these methods are beyond the scope of this blog post, but the key is that either way, we’ll find principal components in decreasing order of variance. Additionally, prior to computing the variance — and regardless of the method we use — we’ll want to ensure that the dataset is normalized to account for potentially varying units of measurement. 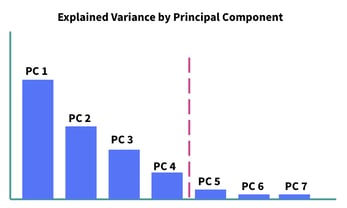 PCA is very fast and works well in practice. However, it does obscure your features, so rather than looking at, say Twix sales, you might be looking at principal component 2, which is some combination of Twix sales along with several other features. If interpretation is important, unfortunately PCA will likely be problematic. However, if it’s not important, PCA is an excellent way to programmatically reduce the dimensionality of your dataset.

Including too many features in your dataset can be problematic, a problem referred to as the curse of dimensionality. Essentially, you’ll need more data, risk overfitting, and potentially run into computation or storage problems.

We hope that you find this high-level overview of dimensionality reduction helpful. Be sure to check out the other blog posts in our “In Plain English” series:

For more information on understanding key data science concepts as well as pros and cons of the most common machine learning algorithms, check out this detailed guidebook with the fundamentals.
Read the Guidebook
September 4, 2020 Data Basics Katie Gross
Share