In the past few years, only 17% of startups have been founded by women. At Dataiku, we believe it’s time to change that. This is why, as part of our Ikig.ai initiative, we hosted and sponsored a Girls in Tech event, Amplify Paris 2019, the world’s largest women’s pitch event exclusively for female-led startups.

We met with the managing director of Girls in Tech Paris, Jamie Soon, to tell us more about the initiative and the issues women in tech face today. 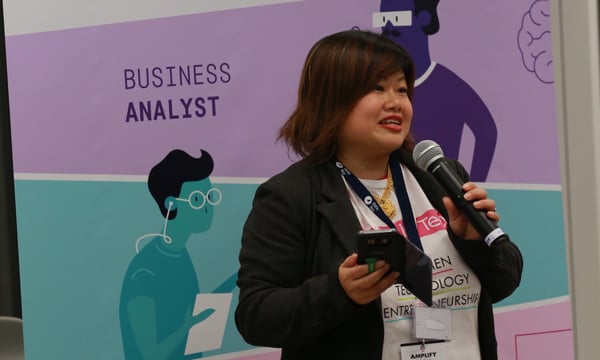 What exactly is Girls in Tech? When and why did you get involved with it?

Jamie Soon: I’ve been the managing director for Girls in Tech for little over three years now. The reason why I wanted to get involved in it was that I’m in science and tech and I really love it, but I’ve come to realize that there simply aren’t enough women in this field, and I wanted to do something about it. On a personal level, I feel like I’ve been relatively lucky all my life, so I wanted to give back to the community and help other people.

I wanted to create a sort of support network, a structure that women could reach out to when they need help. Girls in Tech is actually a global non-profit organization that was started in San Francisco and has existed since 2006. Now, thirteen years later, we have more than 40 local chapters and more than 60,000 members all over the world.

Tell us more about Girls in Tech and Amplify Paris 2019.

Jamie Soon: Girls in Tech Paris focuses on empowering women working in tech in a broader sense, but also women entrepreneurs who are founders of their own tech startups in particular. The Amplify event that we recently did with Dataiku is its second edition in Paris. Amplify is actually an annual Girls in Tech event in San Francisco, and we are the first ones to produce it in another city and country. This year, we wanted to make it bigger and better.

Opening up the event to more people isn’t just about bringing more attention to it on social media. The people we invited were also the people who would be potentially interested in investing in these startups, so in that way, we gave all of the participants a chance at finding funding for their ideas. We wanted to provide a direct business link to elevate these women and to put the spotlight on their startup projects.

Why did you choose Dataiku as a partner to promote gender equality in the tech space?

Jamie Soon: We were very lucky to have two Dataiku employees, Marie and Julie, in the Girls in Tech board, so the initiative for partnering for this event actually came from them. Once we started meeting up and discussing the potential of a partnership, we also found that there was the right “fit in energy” at Dataiku for the initiative. We also really appreciated Dataiku co-founder and CTO Clément Stenac’s speech during the event, it showed real involvement. 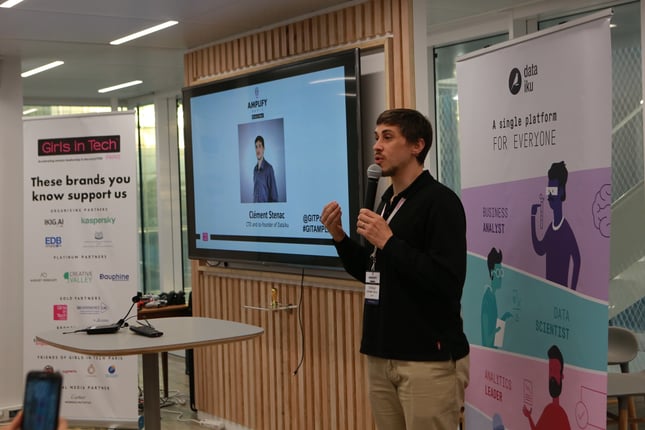 What are the main difficulties for women in tech today?

Jamie Soon: The main issue is that the pipeline is leaky: there are fewer women in tech companies and in technical positions, and when there are fewer women, there is less of a support network for women, this is the “bro syndrome” in some places, etc. In these environments where women are underrepresented, they tend to start feeling left out and under-confident.

On top of that, it has been proven that by the time women reach C-level, they are about 60 times less likely to be promoted compared to a man. As we move up the corporate ladder, we see more and more women being overlooked for higher positions, drop out themselves, or some combination of both. That is the leaky pipeline.

And then of course, when the pipeline is leaky and girls know about it and constantly feel left out, they are going to be less and less likely to go into science and tech, so the female pipeline becomes more and more narrow.

To top it all off, the pipeline is not only leaky, but can also be toxic on the inside, because of so many conscious and unconscious biases around women in the workplace today. There are so many false stereotypes that we keep hearing, such as “women are bad decision makers” or “women make bad financial decisions,” etc. When we hear all of these stereotypes repeated over and over again, we gradually start believing them, even though most of them have been statistically proven to not be true.

What can companies do to address the issue and work towards a more inclusive environment?

Jamie Soon: I think change often starts on an individual and interpersonal level, so as women in tech, whenever we hear these harmful stereotypes repeated or whenever are overlooked or made to feel incapable or uncomfortable, we should learn to verbalize it and speak up about it on an internal level in order to encourage the development of a healthier company environment. It’s important to be able to talk about and bring attention to these systemic issues, which has to start bottom-up.

And of course, on an organizational level, it’s up to the management to set a positive example and work towards a positive company culture that is inclusive towards women as well as men. This can also be encouraged on an institutional level, for instance with measures such as the Gender Equality Index that France introduced recently, where companies are graded on their capacity to ensure a gender equal recruitment process and an inclusive work environment, and are required to achieve a certain score.

A lot of women often don’t feel comfortable with scores like that, because they don’t want to feel or be perceived as only being where they are because of a quota, but such measures are important in order to move things forward. A lot has been achieved in terms of workplace gender equality for the past 10 years, but things are still moving too slowly. I hope that through large scale processes on an institutional and on a company level, but also through individual actions and initiatives such as Amplify, we can accelerate gender equality, so that it would be reflected on a global level.

Check out Girls in Tech Paris to learn more about them and how you can get involved, or find out more about the global initiative.

At Dataiku, we believe technology and AI should benefit everyone and should be used to solve some of the world's most complex challenges. Find out more about Ikig.ai, our AI-for-good initiative, and all the causes we support.
Let's Go
October 29, 2019 Dataiku Company Nancy Koleva
Share

Celebrating 1 Year of Learning & Growth With the Dataiku Community