Learning a new language can seem like an insurmountable challenge - however, approaching the problem with data science and using a few smart techniques can ease the learning curve and provide a starting point from which to base your studies.

I started working at Dataiku in January 2018, and seeing as I was surrounded by many French colleagues and traveling more and more to Paris for internal meetings and events, I became fascinated with the culture and got curious and motivated to learn the language.

I signed up for a French class, which was useful, as I managed to understand the structure of the language and the syntax. But at the same time, I found myself slightly demotivated, primarily as I realized that the pace would only allow me to engage in very basic conversations (needless to say, picking up on a subject or a joke when my colleagues are talking in the office or in one of our gatherings was not happening anytime soon)!

The first thing I thought about was to google some tips and tricks on how to pick up a new language quickly - the majority of them were suggesting to listen to more French songs and to watch more French movies, but I already knew that!

Then, I came across this article and the topic was very interesting. Basically the idea is that after learning the most frequent 1,000 words used in day-to-day conversations, not only will I gain a workable vocabulary, but I will also have a stronger sense of the language’s structure, which was encouraging.

But how would I get the most frequent (ideally top 1,000) words used in day-to-day conversations in French? Through Books? or Newspapers? With more research I came across another article written by a fellow data scientist who was also interested in learning a new language (Swedish), and that gave me an idea.

Friends, the most popular TV show with its 10 seasons, was the best way I could think of to get a script of typical day-to-day conversations (that is, vocabulary used repeatedly) between friends, coworkers, neighbors, colleagues, and more. So I decided to use this as my dataset from which to extract the 1,000 most commonly used words in French. 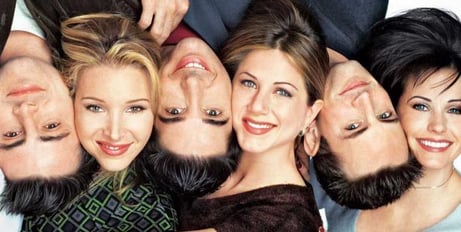 I managed to procure all the French subtitle files for each of the 10 seasons here, which I downloaded and used as the basis for the project. From there, I roughly followed the Seven Fundamental Steps to Completing a Data Project and was able to:

I started with a very messy dataset, with rows similar to this:

I had other rows full of special characters and symbols that I didn’t need (such as: ! ? . , … <j> </b/>) as well as rows that included numbers to identify the line of the subtitle and timing on the screen

I removed all this as well as empty rows, empty columns, columns of timing, episode number, and season number, which were not relevant to this particular data project.

After all this, I ended up with one very clean column with each row representing a line of a subtitle (i.e., one sentence or two of text).

The next step was to work on those rows to decide what to keep and what to remove:

This is how I ended up with one column for my dataset, with each row including either an individual word or a combination of two or three words used together.

Almost done - all I needed to do after that is to sort these rows based on frequency to get my top 1,000 words (which, because of the Ngrams step, could actually also be expressions - more than one word used commonly together) used on a daily basis.

But I wanted MORE!!!

Remember, the goal of the project was to memorize and understand the top 1,000 words or expressions. For that, the list of the top 1,000 was not enough - I also needed to know their meanings. I could have manually used Google Translate on each row to get the translation. OR I could get all the translations for all the rows at once and have no excuse to actually start doing my homework!

Since I used Dataiku for the project, which allows integrating with other data sources through external APIs, I was able to easily use the Google Translate API by:

Voilà! Now I have my top 1,000 French words and phrases as well as their English translations, and I was able to do this all in just a few quick steps.

If you want to try this on your own, you can download Dataiku for free here - check out the tutorials here as well for more tips on getting started quickly on your first data science project.

Get monthly updates of everything going on at Dataiku: new content, product updates, upcoming events, and everything the Dataiku team has been up to!
Sign Up
November 1, 2018 Data Basics, Use Cases & Projects, Dataiku Product Noha Badawy
Share

How Operationalization of Alternative Data is Reshaping the Asset Management Industry

5 Pieces of Good News for Data Analysts in 2020