McDonald's Turns to AI for a Better Burger

While Burger King may still be poking fun at AI following their robot commercials last year, other burger titans embrace AI as the next step in their evolution. This year, Wendy’s announced that it’s adding $25 million to its digital budget, while McDonald's took things to the next level when they purchased a marketing AI startup for over $300 million, their largest acquisition this century. Burger joints are leveling up their technology stack to drive seamless user experiences. 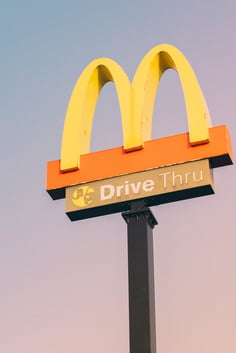 McDonald’s has been visually ramping up its data integration for a few years now; this is not the sort of shift that can happen overnight. In 2017 they released their mobile ordering app, which helped customize user orders at a time of declining traffic. After a solid 2018, McDonald’s was able in 2019 to purchase Dynamic Yield, a startup based in Tel Aviv. Its main use case is in promoting upsell items based on store history, time of day, weather, and other factors. 700 AI-enabled menu boards are already in stores, with more to come. AI integration isn’t limited to McDonald’s either, as other burger chains adapt.

Recently the Good Times Burgers & Frozen Custard in Denver began testing an AI voice assistant to take drive-through orders. The assistant goes through the ordering process with customers in a consistent and friendly manner. It is able to help sustain operations when inclement weather prevents employees from making it to work, and human employees are able to intervene if there’s an issue. Rob Carpenter, whose company Valyant AI designed the system, says there are immediate employee benefits. “Over the course of an eight-hour shift, they don’t have to repeat the same welcome language hundreds of times.”

However, not everyone is convinced that this is a positive outcome; critics maintain that as we pick and choose which roles to automate, we undervalue these jobs turn human contact into a luxury. In the same Washington Post article that quoted Carpenter, Erikka Knuti, Communications Director for the United Food and Commercial Workers Union, is quoted as saying that automation won't just be detrimental to employees, but may even hurt the food industry in the long run: “retailers and businesses underestimate the importance of the customer service interaction — that point when a customer hands over their money and they get a warm smile in return that tells them they’re valued.”

The gourmet burger startup Creator has created a burger machine out of Willy Wonka’s factory: fully automated, precise, and with a serious commitment to quality. They are committed to supporting and sustaining their staff with more communal and creative work. The goal is not to out-mode fast-food labor, but rather make the tasks associated with it more fulfilling. Yet there are some roles that will inevitably diminish in prominence as AI becomes a bigger part of burger joints’ customer workflows.

How to Drive Data Ethics (and Profits)

At the end of the day, if AI can help increase profit margins, ethical companies will be better able to support their employees and help them grow. It could  be a win-win for business leaders, employees, and customers who receive better, faster service.

Get the Ovum White Paper