Top 3 Tips for a Successful Hackathon

The day prior to our EGG LDN 2019 conference, we’ve opened the doors of our U.K. office for a hackathon, providing participants with the opportunity to learn new skills, improve their knowledge of Dataiku, and work together on positive-impact projects.

In an event where teams compete in a limited time to build projects, the key to success is effective collaboration. Here are three insights we’ve learned with participants that might be useful to you in your day-to-day activities.

Interestingly, the team that came in a close second was composed of participants who had never met before. Being forced to communicate extensively from the start led them to create an enriched picture of the issue, building upon their singular perspectives rather than sticking to the usual ways.

This proved especially important as participants explored datasets from nonprofit Kiva.org, an online crowdfunding platform extending financial services to poor and financially excluded people around the world. The team set out to build a recommender system to suggest new loan opportunities to lenders, taking into account social impact and winning the jury over with the originality of the project.

2. Data Visualization Is Your Friend

The ability to quickly visualize your data helps not only to communicate end results, but also early on in the data workflow to facilitate and improve collaboration. As the teams used between 48 and 80 different datasets, it was critical to have a clear mapping of all the data at their disposal and be able to check their teammates’s progress to build on synergies. 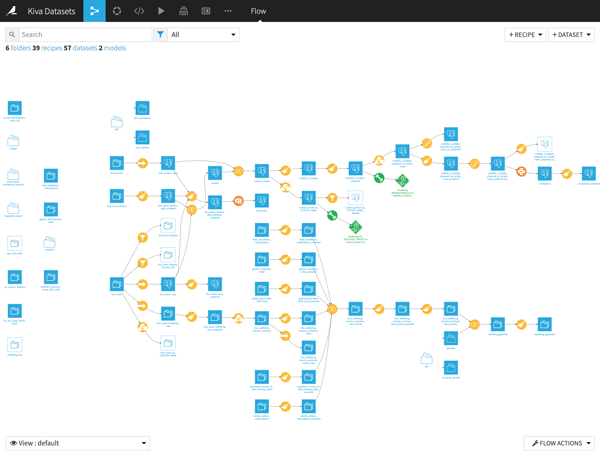 Data workflow from one team

Participants who had never used Dataiku before also liked the ability to draw charts in a few clicks, which provided a useful basis for discussion and enabled them to explore new directions. For instance, in measuring the time between project publication and funding, the winning team was able to quickly explore the weights of different factors, such as loan amount, activity domain, borrower’s gender, and language. 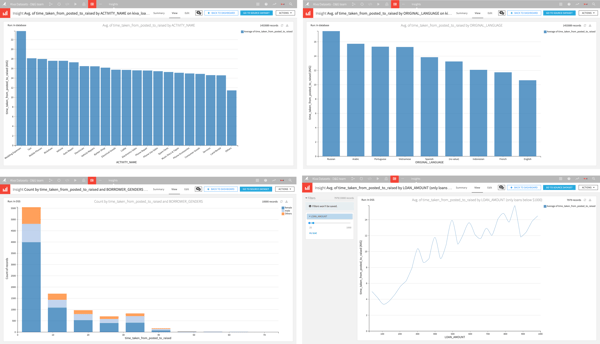 3. Play to Each Other’s Strengths

Successful collaboration takes a clear common goal, diverse yet defined roles, and efficient communication. The winning team starting by defining the issue they aimed at solving: “How do we help people to raise loans as quickly as possible?”.

In exploring the most impactful factors, they set out to divide and conquer by effectively attributing tasks according each teammate’s skills and interest. For instance, Giacomo built the dashboards, while Theo focused on modeling, and Erica started to document the project.

The same applies for technologies: Calin coded his analysis in R, while Erica preferred to use Dataiku’s visual interface.

“Our team is highly collaborative and once we set an objective together we began dividing the work similar to how a scrum team may operate. Our skill sets are essentially T-shaped and we can support each other and shift workload as needs change. In the hackathon, we found mini 10 min catch up sessions where we talk about our progress really helpful, it kept us on track and highlighted areas where we needed support.” - Jeffrey Fung, Data Science Manager at Domestic & General

Want to further explore how Dataiku facilitates collaboration? Enjoy the 2-week free hosted trial and try it for yourself!

Improve Collaboration on Your Team