Sky Diving… For The Second Time

Fifteen years ago, as part of the HEC Entrepreneurs Master’s integration program, I had my first skydiving experience. I remember a mix of fear and excitement, climaxing in total fear when, at 3,000 feet of altitude, the door opened. As I dropped into the vacuum of space and the air surrounded me, the wind slammed my chest and dizziness took over. I still don’t know how I did it. But I did. And as the parachute opened, I still feel the rush of adrenaline and that amazing feeling of flying, even if just for five minutes. 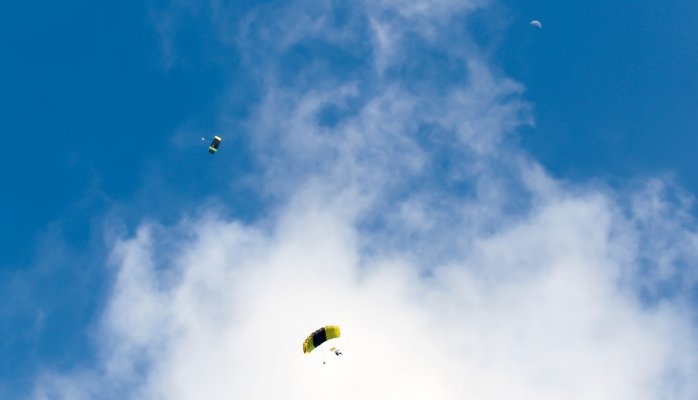 After an amazing 10 years at Exalead followed by five great years at Dassault Systèmes, I feel like I’m experiencing that same jump again, but this time from a professional perspective. This is my 2016 jump into the unknown.

But this time, unlike my first physical jump out of a plane 15 years ago, I’m not doing it because others are too. No: this time, it’s because I feel that there is the right alignment of stars with Dataiku, an ambitious project, an exceptional technology, an extrordinary team, and a great location.

I believe in the project. Because, contrary to what some may say, big data is not evil and should not be considered as such. Collecting information from what we are doing as consumers, as citizens, as individuals, and making sense out of it all, does not make all companies and organizations Big Brother.

And it’s not always about only increasing return on investment (ROI) either. Collecting and analyzing all that data can contribute to building a better future. From limiting waste, improving resource consumption, reducing churn, optimizing processes, personalizing healthcare assistance, to helping drivers find parking spaces (yes, that too!); all that big data can have extremely positive outcomes. But it’s not only about the data.

It’s about the people behind the data, the ones that are leveraging all of that information to create solutions and to improve daily processes and even lives. Ordinarily, the creation of such data products belongs to a tiny piece of the population. They have a black box that few of us understand. But, the paradigm is shifting. Creating these data products is growing increasingly accessible to a wider population. This is something I believe in, something I am ready to dedicate myself to.

I believe in the technology. Though I am not a data engineer, I am old enough to look back at my past experience and trust what I have seen. Ten years ago I worked alongside Florian Douetteau, Clément Sténac, and Patrice Bertin. And even after all this time, I still vividly remember how much their counterparts, whether in Europe or in the United States, valued their opinions and decisions. I too value and trust in them and strongly believe in what they create.

I’ve also learned to recognize a weak signal. That’s right: when three people you know but that don’t know each other - Nicolas C., Michael N., and Thierry B. - each separately tell you to check out that 2.5-year-old 50-person software company named Dataiku, you know there’s something there ;-). All the more when it is corroborated by Forbes and Wired.

I believe in the team. Working for a company, no matter what it does or what it sells, is first and foremost about working with people. On several occasions before joining this company, I was lucky enough to experience firsthand, the Dataiku karma. Fun and professional, inspired and invested, always looking to learn and improve, humble yet driven, connected but diverse (as described by Anne-Sophie, part sales implementation specialist, part opera singer)

A City of Light… A City of Apples

I believe in Paris, in its energy, in its spirit of liberty, and in the vividness of its entrepreneurs and engineers. Though Dataiku continues to expand its reach over seas, with offices in New York City and users of Data Science Studio (DSS) around the world, the core of our technology is developed in Paris. In fact, as our team continues to grow, we have just moved to big offices last week!

Some may find this post quite naive. I’m definitely calling it resolutely optimistic.

… A mix of fear and excitement, climaxing now in total excitement...

Get monthly updates of everything going on at Dataiku: new content, product updates, upcoming events, and everything the Dataiku team has been up to!
Sign Up
January 28, 2016 Dataiku Company Carole Offredo
Share

These Are the Best Marketing & Retail EGG Talks from 2019

These Are the Best Media & Entertainment EGG Talks of 2019