The Nuts and Bolts of Deep Learning Algorithms for Object Detection

You just got a new drone and you want it to be super smart! Maybe it should detect whether workers are properly wearing their helmets or how big the cracks on a factory rooftop are.

In this blog post, we’ll look at the basic methods of object detection (Exhaustive Search, R-CNN, Fast R-CNN and Faster R-CNN) and try to understand the technical details of each model. The best part? We’ll do all of this without any formula, allowing readers with all levels of experience to follow along!

Finally, we will follow this post with a second one, where we will take a deeper dive into Single Shot Detector (SSD) networks and see how this can be deployed… on a drone. 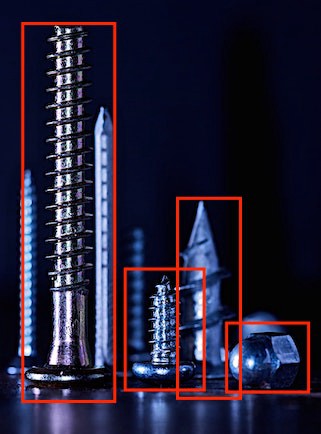 Our First Steps Into Object Detection

Is It a Bird? Is It a Plane?— Image Classification

Object recognition is the process of identifying and classifying objects inside an image, which looks something like this:

In order for the model to be able to learn the class and the position of the object in the image, the target has to be a five-dimensional label (class, x, y, width, length).

The simplest object detection method is using an image classifier on various subparts of the image. Which ones, you might ask? Let’s consider each of them:

1. First, take the image on which you want to perform object detection. 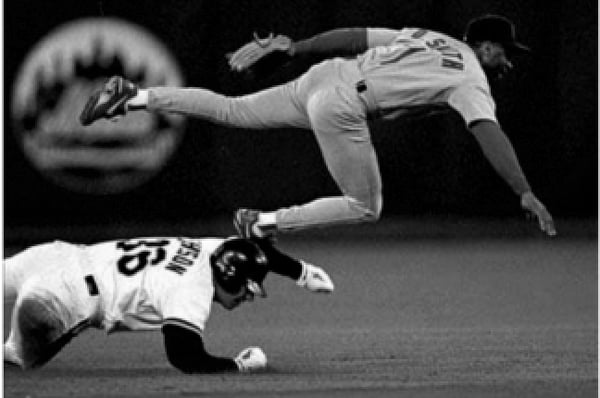 2. Then, divide this image into different sections, or “regions”, as shown below: 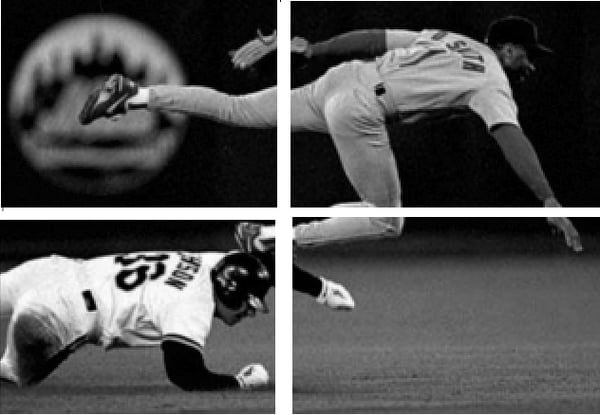 3. Consider each region as an individual image.

5. Finally, combine all the images with the predicted label for each region where one object has been detected. 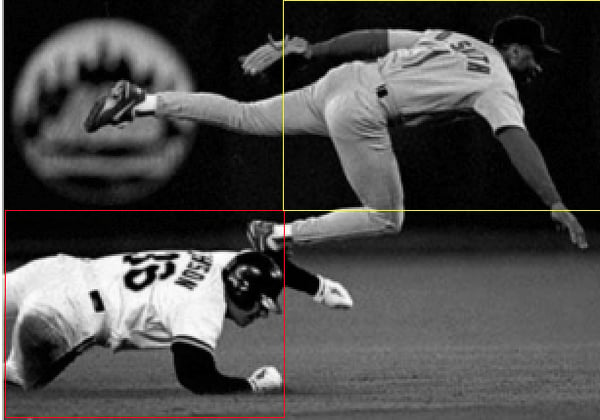 One problem with this method is that objects can have different aspect ratios and spatial locations, which can lead to unnecessarily expensive computations of a large number of regions. It presents too big of a bottleneck in terms of computation time to be used for real-life problems.

A more recent approach is to break down the problem into two tasks: detect the areas of interest first and then perform image classification to determine the category of each object.

The first step usually consists in applying region proposal methods. These methods output bounding boxes that are likely to contain objects of interest. If the object has been properly detected in one of the region proposals, then the classifier should detect it as well. That’s why it’s important for these methods to not only be fast, but also to have a very high recall.

These methods also use a clever architecture where part of the image preprocessing is the same for the object detection and for the classification tasks, making them faster than simply chaining two algorithms. One of the most frequently used region proposal methods is selective search:

Its first step is to apply image segmentation, as shown here:

From the image segmentation output, selective search will successively:

Now that we understand how selective search works, let’s introduce some of the most popular object detection algorithms that leverage it.

Ross Girshick et al. proposed Region-CNN (R-CNN) which allows the combination of selective search and CNNs. Indeed, for each region proposal (2000 in the paper), one forward propagation generates an output vector through a CNN. This vector will be fed to a one-vs-all classifier (i.e. one classifier per class, for instance one classifier where labels = 1 if the image is a dog and 0 if not, a second one where labels = 1 if the image is a cat and 0 if not, etc), SVM is the classification algorithm used by R-CNN.

But how do you label the region proposals? Of course, if it perfectly matches our ground truth we can label it as 1, and if a given object is not present at all, we can then label it 0 for this object. What if a part of an object is present in the image? Should we label the region as 0 or 1? To make sure we are training our classifier on regions that we can realistically have when predicting an image (and not only perfectly matching regions), we are going to look at the intersection over union (IoU) of the boxes predicted by the selective search and the ground truth:

The IoU is a metric represented by the area of overlap between the predicted and the ground truth boxes divided by their area of union. It rewards successful pixel detection and penalizes false positives in order to prevent algorithms from selecting the whole image.

Going back to our R-CNN method, if the IoU is lower than a given threshold (0.3), then the associated label would be 0.

After running the classifier on all region proposals, R-CNN proposes to refine the bounding box (bbox) using a class-specific bbox regressor. The bbox regressor can fine-tune the position of the bounding box boundaries. For example, if the selective search has detected a dog but only selected half of it, the bbox regressor, which is aware that dogs have four legs, will ensure that the whole body is selected.

Also thanks to the new bbox regressor prediction, we can discard overlapping proposals using non-maximum suppression (NMS). Here, the idea is to identify and delete overlapping boxes of the same object. NMS sorts the proposals per classification score for each class and computes the IoU of the predicted boxes with the highest probability score with all the other predicted boxes (of the same class). It then discards the proposals if the IoU is higher than a given threshold (e.g., 0.5). This step is then repeated for the next best probabilities.

To sum up, R-CNN follows the following steps: 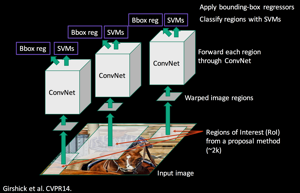 There are, however, some issues with R-CNN:

Fast R-CNN — as its name indicates — is faster than R-CNN. It is based on R-CNN with two differences:

Here is the architecture of the network:

As we can see in the figure below, Fast R-CNN is way faster at training and testing than R-CNN. However, a bottleneck still remains due to the selective search method.

How Fast Can R-CNN Get? — FASTER R-CNN

While Fast R-CNN was a lot faster than R-CNN, the bottleneck remains with selective search as it is very time consuming. Therefore, Shaoqing Ren et al. came up with Faster R-CNN to solve this and proposed to replace selective search by a very small convolutional network called Region Proposal Network (RPN) to find the regions of interest. 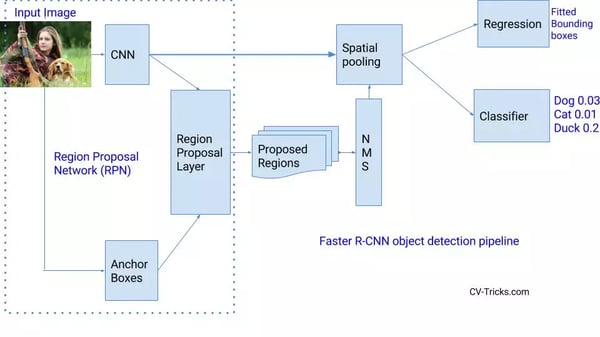 In a nutshell, RPN is a small network that directly finds region proposals.

One naive approach to this would be to create a deep learning model which outputs x_min, y_min, x_max, and x_max to get the bounding box for one region proposal (so 8,000 outputs if we want 2,000 regions). However, there are two fundamental problems:

To overcome this, we are going to use anchors:

Anchors are predefined boxes of different ratios and scales all over the image. For example, for a given central point, we usually start with three sets of sizes (e.g., 64px, 128px, 256px) and three different width/height ratios (1/1, ½, 2/1). In this example, we would end up having nine different boxes for a given pixel of the image (the center of our boxes).

So how many anchors would I have in total for one image?

It is paramount to understand that we are not going to create anchors on the raw images, but on the output feature maps on the last convolutional layer. For instance, it’s false to say that for a 1,000*600 input image we would have one anchor per pixel so 1,000*600*9 = 5,400,000 anchors. Indeed, since we are going to create them on the feature map, there is a subsampling ratio to take into account (which is the factor reduction between the input and the output dimension due to strides in our convolutional layer).

In our example, if we take this ratio to be 16 (like in VGG16) we would have nine anchors per spatial position of the feature map so “only” around 20,000 anchors (5,400,000 / 16²). This means that two consecutive pixels in the output features correspond to two points which are 16 pixels apart in the input image. Note that this down sampling ratio is a tunable parameter of Faster R-CNN. 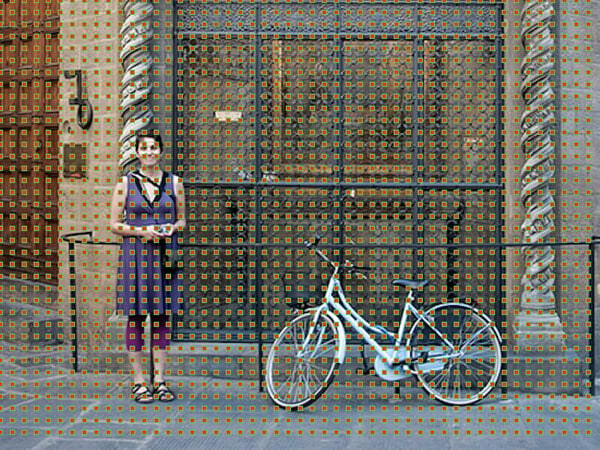 Center of the anchors

How to Train the Region Proposal Network

→ The anchor has the highest IoU with a ground truth box among all the other anchors.

→ The anchor has at least 0.7 of IoU with a ground truth box.

Finally, a few remarks about the implementation:

How to Use the Region Proposal Network

The next step is to create a similar model as in Fast R-CNN (i.e. RoI pooling, and a classifier + bbox regressor), using RPN instead of selective search. However, we don’t want to do exactly as before, i.e. take the 2,000 proposals, crop them, and pass them through a pre-trained base network. Instead, reuse the existing convolutional feature map. Indeed, one of the advantages of using an RPN as a proposal generator is to share the weights and CNN between the RPN and the main detector network.

To sum up, Faster R-CNN is more accurate than the previous methods and is about 10 times faster than Fast-R-CNN, which is a big improvement and a start for real-time scoring.

Even still, region proposal detection models won’t be enough for an embedded system since these models are heavy and not fast enough for most real-time scoring cases — the last example is about five images per second.

In our next post, we will discuss faster methods like SSD and real use cases with image detection from drones. We’re excited to be working on this topic for Dataiku DSS — check out the additional resources below to learn more: