What Is Feature Engineering?

Dr. Jason Brownlee, Ph.D., is a machine learning specialist and founding researcher at Machine Learning Mastery. According to Dr. Brownlee, “feature engineering is the process of transforming raw data into features that better represent the underlying problem to the predictive models, resulting in improved model accuracy on unseen data.” In his perspective, it comes down to getting the most out of your data for predictive modeling.

Put another way, feature engineering is the process of using domain knowledge to transform the raw data into a form that provides better or new signals to improve model accuracy. It involves creating and adding more variables (known as features) to the dataset at hand in order to improve model performance. It’s an important concept because it ensures that the input dataset is compatible with machine learning (ML) algorithm requirements and, ultimately, helps facilitate the entire ML process. 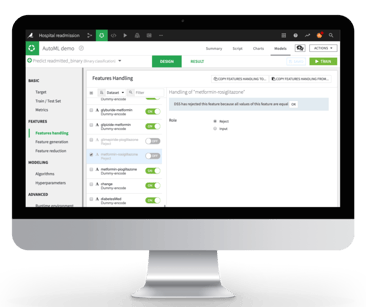 Additionally, built-in feature generation can programmatically create new pairwise combinations of features to provide additional inputs to the model, or users may instead choose to apply common feature reduction techniques.  Once created, Dataiku documents the settings and stores feature engineering steps in recipes for reuse in scoring and model retraining.