How AI Is Transforming Banks & Banking

Data has always been the foundation of the banking industry. What has changed in recent years, of course, is the amount of data available and the speed at which it is processed as well as the need to quickly respond to market changes.

New technology gives banks the power to collect, store, and analyze exponentially more information than was imaginable not too long ago. In the wake of fintech, banks already know that to succeed in today’s ecosystem, they must use this wealth data at a massive scale to continuously innovate. 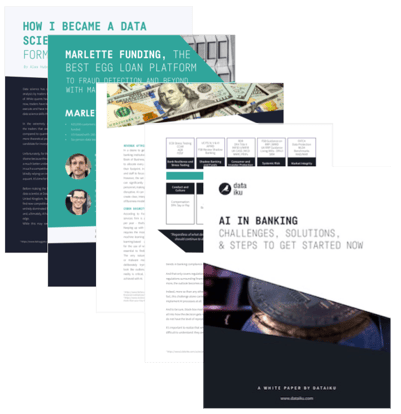 Yet most struggle amidst complexities of the data itself, regulations, and more, to get AI initiatives off the ground. But they don’t have to — here at Dataiku, we work with banks every day to increase their AI maturity. So we know that today’s banks seeing success with AI initiatives:

Go Further With AI in Banking

Get a copy of the 40-page white paper exploring challenges and solutions (as well as use cases, success stories, and more) for banks looking to leverage AI.
Let's Go
July 15, 2019 Scaling AI Lynn Heidmann
Share

Building a Culture of Experimentation