Not all data scientists are created equal, especially now that several “generations” of data scientists have entered and left organizations.Today, data scientists come in many flavors with different strengths that may suit different types of enterprises depending on the types of problems or projects they are working on. Not to say that one type is better or worse than another type of data scientist — it all depends on what a business is looking for.

But spoiler alert: the fancy ones with the PhDs tend to be unavailable (not to mention expensive), because 80 percent of them are taken by Google. On the other hand, maybe that’s not really what your business needs.

Here’s a breakdown of just a few different types of data scientists out there today: 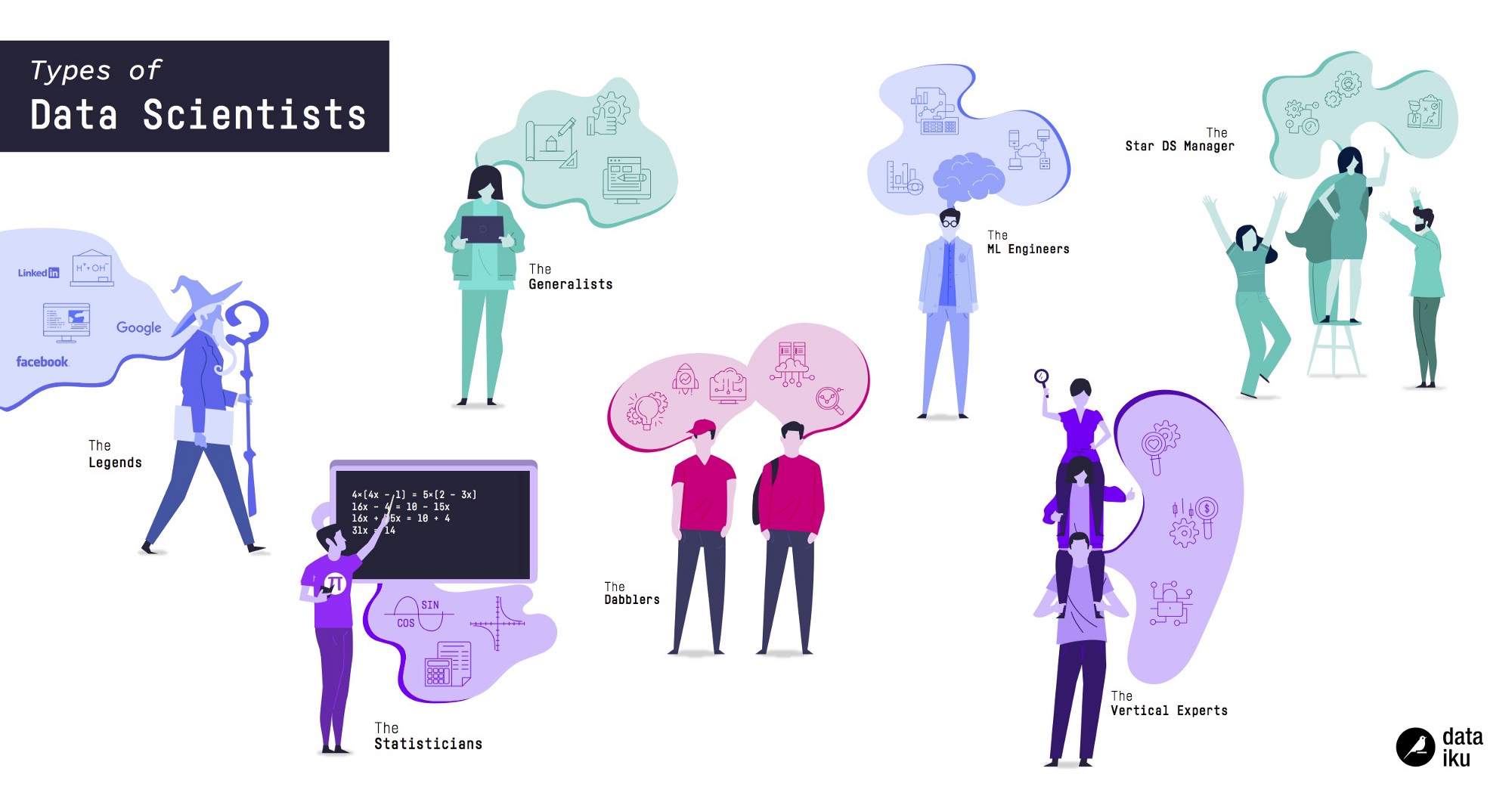 These are the jack-of-all-trades of data scientists. They have been around since before data science was really a thing, so they probably studied math extensively in their studies, but they are also great programmers and have mastered several languages (including almost-forgotten ones, like C++). Bonus: they can speak business, too.

The Legends are high utility, but they’re also high price tag — in fact, they probably already work at LinkedIn, Google, or Facebook.

Like The Legends, but toned down a notch. They maybe aren’t a superstar in any one area, but they know a little something about everything.

This can be a good fit for larger teams where responsibilities are always shifting, but also for a one-man show at a smaller company where versatility is essential.

This is a tricky one because it brings up all kinds of difficult-to-answer-questions, namely: what is the difference between a statistician and a data scientist, anyway? (Nate Silver of FiveThirtyEight has famously stated that data scientist is just a “sexed up” term for statistician).

The Statisticians will be extremely literate in, obviously, statistics. Note that this is a skill that, in theory, all data scientists (at least those with formal education) should have. But with this group, it will be especially strong. They might have specific experience in the area of finance. On the other hand, they may not be as well-versed in working with really huge datasets.

The Dabblers (or The Software Engineers)

The Dabblers are a group that don’t do data science as their full-time role or primary responsibility, but they do it as part of their job (let’s say 20-ish percent of the time).

Most likely, they are primarily a software engineer (or maybe a product manager) that has experience with data science, but only as a function or in the context of the rest of the role.

But what they do bring is an understanding of model development, software architecture, and model deployment that can be essential for certain types of businesses and datasets (but especially very large datasets for businesses where the model IS the business).

The Vertical Expert is a data scientist who has lots of experience in a particular domain. (S)he probably started out as a generalist, but after years working in a particular industry, has developed the business knowledge necessary to solve problems in a certain context.

They can be valuable for their obvious back-knowledge from the get-go, but the drawback can be difficulty thinking outside the box on standard problems or questions.

The Star DS Manager concerns him or herself with overall team productivity, removing roadblocks, tooling, etc.

While The Star DS Manager could, of course, come from a background as any of the previously mentioned profiles, (s)he is no longer really focused on the data science itself. So the original profile is less important than the ability to get a team moving more quickly and being able to put more models in production — in fact, this role can often be filled by an analyst, data engineer, or someone with deep business knowledge.

It is beneficial to understand and admit there are all kinds of data scientists, even if at the end of the day they all have the same title. Perhaps in the future, there will actually be different names for data scientists with different specialities- here’s to hoping this time next year it will be an emerging trend.

Until then, before hiring, consider exactly what the needs of the business are and which type of data scientist would add the most value. Making this type of decision before creating a job posting will be beneficial in listing specific skills and honing interview questions.

Learn How to Retain Data Scientists

Once the business has hired the perfect data scientist, the challenge certainly doesn’t stop there — keeping them happy is difficult no matter what their type or speciality. Read more about addressing this challenge in "Staffing the AI Enterprise."
Read the White Paper
June 24, 2020 Scaling AI, Featured Florian Douetteau
Share

The Many Flavors of Gradient Boosting Algorithms

How to Retain Data Scientists