This is part two of a series of articles, "Deep Beers Playing With Deep Recommendation Engines Using Keras."

Recall that in Part 1 we created two recommendation engine models on top of our data: a matrix factorization model and a deep one. To do so, we framed the recommendation system as a rating prediction machine learning problem. Note: If you haven’t read Part 1, this won’t make much sense so head over here to catch up.

The embeddings are trainable layers, which means that throughout the training, we learn a new dense representation of users and beers. In this part, we will try to explore these spaces by looking at: 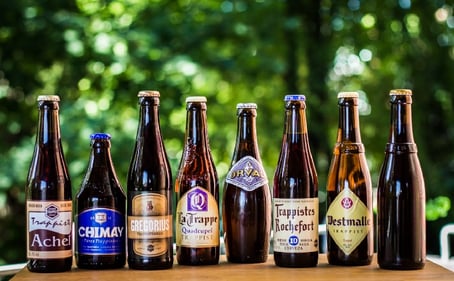 This is what I got by searching "Chimay similar taste beers" on Google images. Can we get something as good? Can you guess what the beer on the right is?

Getting the Embeddings of the Beers

The first thing we need to do is to get these embeddings for all beers, i.e., a table with nb_beers (or nb_users) lines and p columns, with p the dimension of the trained embedding (in our case 10).

Turns out, it’s really simple in our case because our embeddings correspond exactly to the weights of the model. Here is the code for the matrix factorization model:

In the case where the embeddings we want to look at are not directly connected to the inputs (this will be the case in Part 3), it is not possible to extract the embeddings as a weight matrix. It is possible, however, to use the predict function on a model that outputs the embedding layer.

Now that we have gathered the representations, let’s explore them.

The first thing we can do is to visualize whether the distance between two beer embeddings makes sense. Are IPAs close together? Are they closer to APA than to Pilsner ? More precisely, we are going to check the closest beers to a given list to see if it matches our expectations. I chose the following beer list (“Description” field might reflect personal opinions).

I wanted to have the most diverse list in terms of style, taste, and ABV (light, fruit, Belgium, IPA, imperials, etc.) containing beer I knew. In what follows, I used the cosine similarity score, but I got similar results with euclidian distance. The code to perform this calculation can be found in my notebook and you can have a look here, where I found the inspiration.

Let’s have a look at the 10 closest beers to each one on the list, starting with the ones with low ABV. 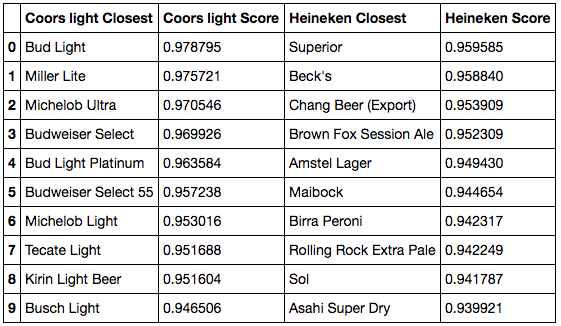 Conclusion: Overall, we do have a good match between a beer and its neighbors. It is possible to check the euclidian distance instead of the cosine similarity, but the results are very similar. The unexpected behaviors (like the one of Leffe) seem mostly due to the bias of the dataset, since most users are American. Another bias that we should be aware of is the fact that most users are likely to be beer geeks, and thus the Coors Light-types of beer will (on average) get low ratings.

What happens if we now check the embeddings retrieved by a deeper model? Since the performance is better, we should have better embeddings… right? Wrong! Here it comes: 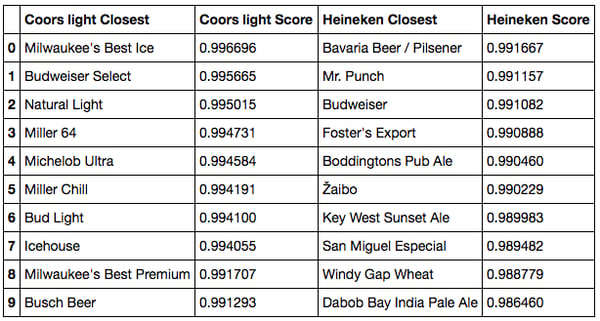 When restricting to the beers that were working the best previously, we see that the ranking makes less sense. While it is still good for Coors Light and correct for Heineken, the results worsen (at the interpretation level). For Chimay, we lost the Chimay beers, one of the trappists and got IPAs instead. For Lagunitas, we recommend fewer IPAs and more malty beers.

It is not perfectly clear why the embeddings show less intuitive results. This is probably because introducing the dot product forces two beers rated the same way to be close regarding the euclidian space, whereas we have no such guarantee for the deeper model.

T-sne of the Embeddings

Basically, t-sne is a dimension reduction technique (a bit like PCA, in a non-linear way) that helps you visualize your data in 2D or 3D. There has been a lot of hype around t-sne algorithm. Mostly because it helps generate nice charts, even if sometimes they may lack interpretation (see below). For more on how to use properly the algorithm, check this nice distill article or the original paper.

But back to our beers: we want to check wether we can find structure in the embeddings created by our models. Will Belgium beers be close together ?

I used scikit-learn to produce charts of the embeddings.

Notice that I perform the t-sne on a “small_embedding.” This is because the algorithm does not scale very well with the number of lines, so I had to restrict myself to a random sample of 10,000 beers.

I got this very nice chart: 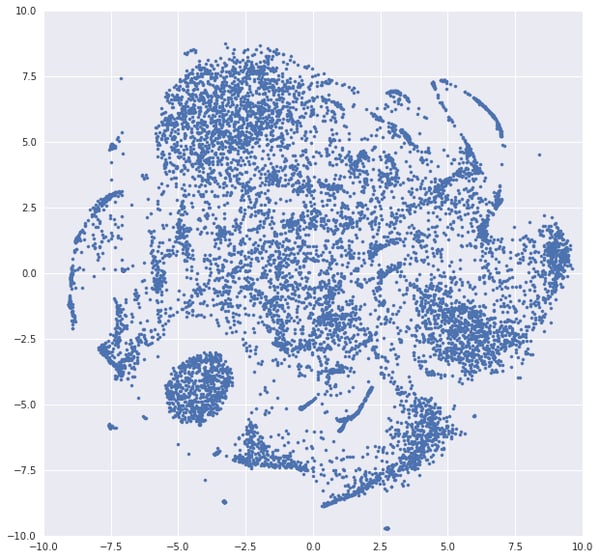 T-sne representation of the beers embeddings

Wow! I know what you think. This t-sne chart looks fine! And you may think at first that we have here very structured information with well-separated clusters. Maybe the oval cluster is mostly composed of pale ales? Turns out, it is not possible to correlate any of these shapes with a style or origin of beer (trust me I tried). I manually checked some areas and was not able to make sense out of it.

In fact, the structure that we have is mostly driven by two axes: the average rating of the beer and the number of times it has been rated. Below, the left graph shows the same data colored by average rating. We see on the left side a cluster of poorly rated beers (mostly American lagers) and some red of yellow clusters (top, center, bottom).

T-sne representation of the beers embeddings, colored by average rating (left) or log of number of times rated (right)

The second charts shows the t-sne representation colored by the log of the number of times the beer was rated. We can see that at the center of the map lies the most popular beers, while the round cluster on the bottom left consists of beers that were rated only once.

The exact same effect appears if we look at the user embeddings.

T-sne representation of the user embeddings, colored by average rating (left) or log of number of times rated (right)

Interestingly, we get the 1 rating cluster again. It would be interesting to dive into the math of this. This may be due to the fact that beers rated only once and by a user who left only one rating cannot be linked to any other beers and are therefore, in a way, interchangeable with each others. Which could mean close, in our space. It could also be due to a t-sne artifact.

If instead of choosing 10,000 random beers, we’ve now chosen the 10,000 most popular beers in terms of records. The structure disappears, and we get a big blob with an almost linear rating gradation.

T-sne representation of the most rated beers embeddings, colored by average rating (left) or log of number of times rated (right)

Again, no obvious structure appears when comparing the coordinates and metadata (such as origin or style of the beer) except if we look at Imperial stouts or light beers, but these styles are highly correlated with average rating.

Since we saw in the closest beer section that the dense model embeddings were less likely to be interpretable, we expect similar results here. Indeed, for 10,000 random beers we got (below) the same structure with a cluster of beers being rated only once. There is also a linear average rating effect a bit perturbed by t-sne artifacts.

If we choose instead the 10,000 most rated beers, we observe again a big blob, driven by average rating.

T-sne representation of the most rated beers embeddings, colored by average rating (left) or log of number of times rated (right)

Again, no correlation between metadata and t-sne position can be found. Except for variables obviously correlated with average ratings (imperial IPAs and stout are well rated, light beers are not). For example, position is highly correlated with ABV (because of ratings average).

It is fairly easy to visualize embeddings using Keras. By looking at closest beers and t-sne representation, we found that:

That’s the end of part 2! Since we could not retrieve style or origin insights from the embeddings, we can wonder if it would make sense to add this knowledge in the model in a content-base-filtering-kind-of-way. If you want to learn more about and hybrid recommendation engines and grid searching the network architecture, check out Part 3 (to come).

The next article in this technical series focuses on improving the performance by changing the model architecture, check it out!
Go to Data From the Trenches
October 9, 2020 Tech Blog Pierre Gutierrez
Share