Setting up Your Feature Store With Dataiku

In this article, let’s assume we are a data science team in a credit card company that wants to deploy an array of use cases to prevent fraud on credit card transactions and provide personalized customer service to their merchants based on their profiles and behaviors. As mentioned in part one, there is a significant overlap between the feature set you would use for a fraud detection model and the one you would use for marketing-related use cases. In order to decrease time to value on these models, we’ll centralize our features in a trusted feature store that can be used across teams and use cases for model training and model scoring in production.

1. Setting Up Your Feature Store Connections in Dataiku

For our online store, our main consideration is latency. Since our online store will be used to enrich queries before feeding it to a model in real-time scoring use cases like our fraud detection use case, we need low latency on feature store look-up operations. For this purpose, we can consider using NoSQL and SQL databases.

For this article, we’ll use AWS S3 as our offline feature store and Snowflake as our online feature store, but there are many more options that are natively supported by Dataiku. To let our Dataiku users read and write to these data sources, we can create dedicated feature store connections in Dataiku:

Once the connections are created and permissions are set, we can start writing features to our feature store!

Features are typically organized in feature groups and stored inside feature tables. In Dataiku, feature tables can be represented as datasets. A feature group is a logical set of features that is identified by a common reference like our merchant ID. Each feature table consists of a reference column to uniquely identify rows, multiple feature columns, and a timestamp referencing the feature value creation date. Here, we create a feature table named fs_company_fraud with the following columns:

Each feature table column can be documented with a description in order to provide clarity and let end users search and discover features.

Our feature table dataset in Dataiku

To ingest feature tables into the feature store, our data scientists can leverage the Dataiku Flow to design and orchestrate feature generation pipelines. Pipelines can ingest data from a variety of data sources, including streaming sources like Kafka. Transformations can be defined using a combination of visual and code-based recipes in Python, R, SQL, PySpark, etc. The ability to use various data sources, compute engines, and recipe types inside the same Flow gives feature developers a lot of flexibility in how they design their feature generation pipelines.

Overview of our feature generation pipeline

Offline feature stores often require storing point-in-time historical values of features. Indeed, when building their training set, our data scientist should join point-in-time correct feature values to each training example. When training models on temporal data, we want to ensure that the feature values are generated only using data points that precede the event we are predicting for each row in our training dataset. This ensures that we will not introduce any data leakage while training our model. This is called point-in-time correctness and is a key attribute of feature stores. To create our features for our fraud detection training set, we can’t use any transactions that occurred after the date of the transaction for which we have the label (1 for fraudulent, 0 for non-fraudulent).

This is why we need to version our feature values based on the feature creation date. In Dataiku, we can use time-based partitioning on our merchant_fraud_features dataset to allow for what is often referred as “time travel” in feature store lingo.

Storing historical versions of our feature table through partitioning

4. Syncing the Online Feature Store With the Latest Feature Values

When performing real-time scoring with our fraud detection model, not all features will be available in the query that is sent to our online model API by our payment system. Features like prev_frauds_by_company typically need to be looked up from a feature table based on the customer_Id. In the real-time scoring case, we are only interested in the most up-to-date feature values.

Sync recipe to propagate features to the online feature store

Now that we have our feature generation pipeline, we need a way to update our feature tables in an automated way to ensure our feature values are always up to date based on the available source data. We can do this using a Dataiku scenario, which can either be triggered on a user-defined schedule or based on the availability of new data. In addition to automating the feature table updates, scenarios let you automate data quality checks and alerts to monitor your feature integrity over time and prevent data drift.

For our example, our scenario runs everyday and executes a few steps:

Finally, because the feature tables will be used as inputs to models in production, these orchestrated feature store updates are critical and should be run on a dedicated production environment. With Dataiku’s Deployer, we can easily package our feature creation project as a bundle and deploy it to an Automation node, Dataiku’s production server for batch pipelines.

When training our fraud detection model, we’ll want to leverage the features that our team built and that are already available in the feature store. This will save us a lot of time when building our training dataset.

In Dataiku, this can easily be done by importing feature tables as datasets and using our built-in Join visual recipe to join any number of feature tables from the offline feature store to the master dataset. In order to ensure point-in-time correctness, we’ll add our transaction date and feature creation date as join keys. For each feature table, it is possible to select a subset of columns to join in.

Offline consumption of feature tables through a visual join

Alternatively, we can achieve this through code in a recipe or in Dataiku’s embedded Jupyter notebooks. The Dataiku Python, R, and Spark APIs let you easily load any dataset as a dataframe object and specify dataset columns to load.

Once our base dataset is enriched with features from our feature store, we can use Dataiku’s AutoML features to quickly train and evaluate multiple models. Dataiku’s built-in explainable AI features let us make an informed decision about the model we’ll deploy in production.

Dataiku allows you to author and deploy API services in a few clicks. For example, our trained fraud prediction model can be exposed as an API service to perform real-time scoring. An API service can be made of several endpoints (model prediction, dataset lookup, Python function, etc.). In order to retrieve feature values from a table prior to applying the model, feature store lookups can be added to your API service to enrich the query. The query enrichment can be parameterized to read from the online feature store. Here, we’ll set the lookup key to our id_company and add features to retrieve from the online feature table. 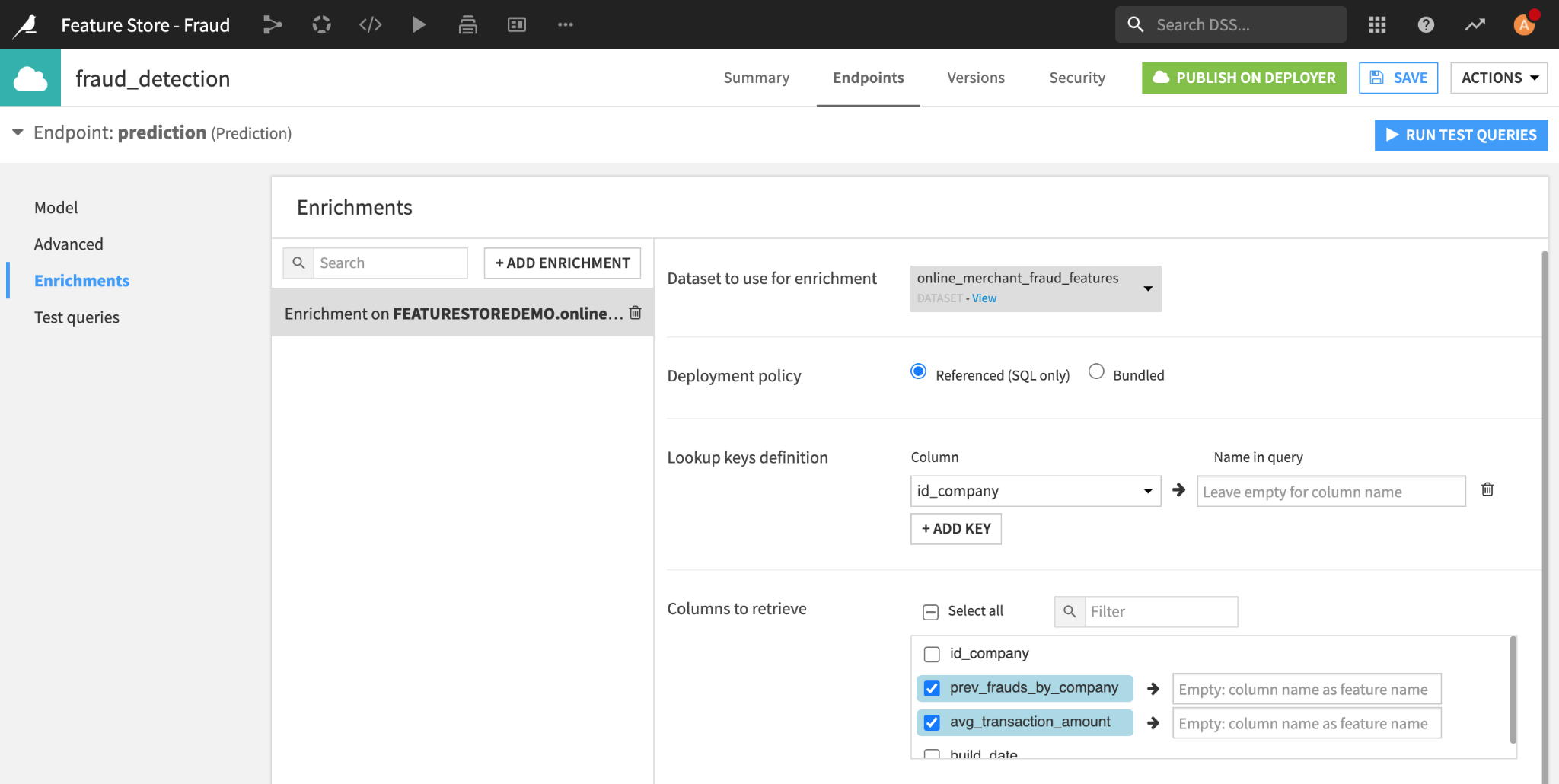 For some of your model features, however, the values can’t be pre-computed and stored in a feature store. For example, the embedding of a natural language input that is only available at query time would have to be computed in real time and not retrieved from the feature store. A Python function endpoint in your API service will let you do these on-the-fly feature computations. To avoid training/serving skew between your offline and online feature generation code, the Python code used in your endpoint can use the same custom Python library as your offline feature generation pipeline.

Once this is set up, we can deploy our API service in production using Dataiku’s Deployer and deploy our service on a flexible and elastic compute cluster. We now have a URL that can be called from our payment system to get real-time predictions on each transaction!

It All Comes Down to Reuse

While feature stores are not the end-all-be-all of efficient ML pipelines, they can definitely help reduce time to market on models by ensuring features are easily reused and not built from scratch. Feature stores also mitigate risks of training/serving skew to make models more robust. Dataiku helps organizations achieve Everyday AI by empowering everyone in the organization with AI. On this journey, you’ll find that combining Dataiku with a feature store is a great way to accelerate your journey and bring even more people on board!