Recommendation Engines: How They Work (in Plain English!)

There are quite a handful of methods of generating recommendation engines, and the most appropriate one depends on the sort of dataset you’re working with and your business goals. Let’s dive into each of them.

Let’s imagine we own Willy Wonka’s Candy Store and we want to launch a new email marketing initiative that uses AI to generate individualized candy recommendations for users. Let’s also imagine that all of our customers have rated the candies they’ve tried from 1-5, and we want to recommend candies to a specific customer, George.

The key data for most recommendation engine algorithms is stored in a dataset referred to as a utility matrix, as shown in Figure 1, which contains past purchase behavior or ratings for each individual user and product combination. Typically, the goal of a recommendation engine is to predict the unknown values and recommend products with high predicted values for an individual user.

This is a simple example, but a utility matrix is typically very large and sparse as users will likely only have reviewed or interacted with a small subset of products. For example, most customers at the candy store will not have tried or rated every product, and most users on Netflix have not seen every movie. This sparsity will come into play when we evaluate different approaches.

Also note that we have explicit rating data here, or, this is an explicit recommendation engine. Many times we only have implicit data such as past purchases or likes, which we’ll use as a proxy for rating data, represented as zeros and ones.

There are two key methods of generating recommendations programmatically:

Let’s dive into specific applications of each method.

Content-based recommendation engines use product information in order to recommend items to a user that are similar to the items that the user liked in the past . If we were recommending songs, we might look at the genre, artist, length, or song lyrics, for example.

In order to do this for George, we must create an item vector for each item in our dataset and a user vector summarizing George’s preferences. Item vectors contain features describing each of our items. In this example, the item vectors might contain information like ingredients, calories, candy category, and so on, as represented for Twix in Figure 2.

Once we’ve generated a user vector, we can compute the similarity between the user vector and each of the item vectors. Several distance metrics can be used, but the most common is cosine similarity. Cosine similarity measures the size of the angle between two vectors, and values range from -1 to 1, where:

After computing similarities between George’s user vector and item vectors for all candies that he has not yet purchased, we’ll then sort these candies in order of similarity and recommend the top N candies, or the “nearest neighbors.” In Figure 5 below, we can see that George likes the green candies which have similar features to the blue candies, which he has not yet purchased, so the blue candies might be a good product to recommend. 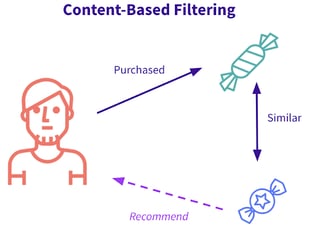 This is a quite simple example; we’ll often work with more complex data types such as text or image data for a content-based recommendation problem. To convert text or image data into something a machine can understand, we must vectorize it, or convert it into a numerical format, once it has been cleaned and pre-processed. There are many forms of vectorization, but that is beyond the scope of this post. See here for a bit of detail on Natural Language Processing (NLP) and vectorization.

Note that there are also other methods of generating content-based recommendations, such as building a traditional classification (to predict likes) or regression model (to predict rating value), clustering to find similar items, or deep learning for even more sparse datasets like image data, but the nearest-neighbors based approach is one of the most classic and commonly used methods.

There are several advantages to content-based filtering. This approach:

Disadvantages of this approach include:

Collaborative filtering deals with the first two disadvantages nicely, as we’ll look at past rating patterns rather than product information. This is based on the assumption that users have specific tastes, and past rating patterns are all we need in order to predict future ratings.

There are two key methods of collaborative filtering:

Memory-based methods use data directly from the utility matrix to find "near neighbors," which can represent either similar users or similar items, depending on the axis considered. If recommendations are made along the user axis, recommendations are user-based and if they’re made along the item axis, they’re item-based. Let’s explore each method.

This approach is relatively simple, but is fairly time consuming and computationally expensive, as we need to compute similarities between each combination of users in our dataset. If our dataset has many more users than items, computing similarities between items can be more efficient. This leads us to item-item collaborative filtering.

Here’s how we generate these recommendations:

Overall, memory-based methods tend to be fairly straightforward, but require a lot of time and computational resources. Item-based tends to be a bit more effective than user-based as items are simpler than users and often belong to specific categories, whereas users often have very complex and unique tastes. Item-based is also typically more efficient as a dataset typically has fewer items than users, but to scale out for a very large dataset, a model-based method is typically a better approach.

The most common model-based methods leverage matrix factorization, a family of dimensionality reduction algorithms aimed at decomposing a matrix into two or more smaller matrices. This rests on the assumption that sparse datasets tend to consist of a handful of latent, or hidden, features, and rather than looking at every item in our dataset, we can project these items into several latent categories, and the same goes for users.

For example, candies in a certain category, such as chocolate candies or gelatin-based candies, may tend to have similar rating patterns. Each of these categories would be considered latent features, and rather than looking at each individual candy, we can group all candies within a category into one column. The categories are often not as clearly defined as this, so a model-based dimensionality reduction approach is typically the best way to discern the latent categories that exist within a dataset.

There are a handful of methods of generating these matrices. Singular Value Decomposition (SVD) and Non-Negative Matrix Factorization (NMF) are two of the most common decomposition algorithms for recommender systems. There are two key methods of optimizing values in the user and item matrices: Alternating Least Squares (ALS) and Stochastic Gradient Descent (SGD). The math behind these algorithms is beyond the scope of this introductory post, but the principal idea is that we’ll decompose one matrix into two smaller ones which capture key latent features.

Once we have converted our utility (customer*candy) matrix into user (customer) and item (candy) matrices, we can multiply these two smaller matrices together to approximate the missing values in the utility matrix. Again, we’ll sort predicted ratings for candies that George has not yet tried, and recommend the top N.

While dimensionality reduction obscures interpretability, matrix factorization tends to generate the strongest predictions of all methods listed, as reducing the dimensionality reduces overfitting, and we are no longer beholden to the restraints of content-based methods. Additionally, memory consumption is greatly reduced by shrinking the size of the matrices we’re working with, and focusing on the key latent factors.

This said, all collaborative filtering algorithms share some key problems:

Content-based recommender systems use user rating history along with product information to identify products similar to those a particular user liked in the past. This is fairly straightforward and works well in recommending new and unpopular products. However, this approach is often a bit too simplistic.

Collaborative filtering does not consider product information at all, and relies strictly on the utility matrix, containing past rating information for all users and products, to find similar users and recommend products that they liked. Memory-based collaborative filtering methods are fairly simple, but often don’t scale well for large datasets. Model-based methods build upon this by leveraging dimensionality reduction to improve memory consumption. Even so, memory consumption is still a common drawback, as is the cold start problem and popularity bias.

Recommendation engines are an extensive topic, and there’s much more to it than what is mentioned here, but we hope you found this introduction to the topic insightful.

Understanding the Power of Data